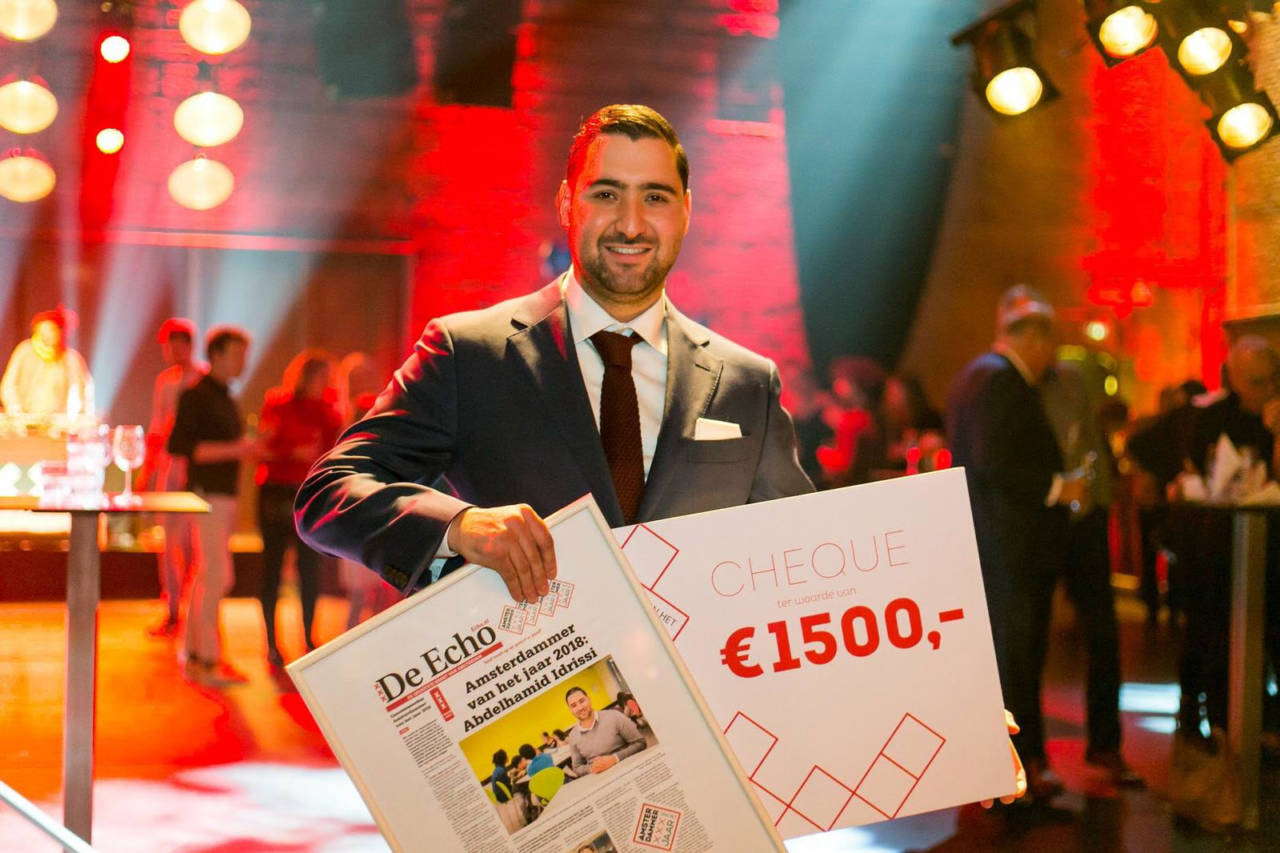 Studiezalen (Study Rooms) is a non-profit organisation helping children from disadvantaged backgrounds get a foot back on the education ladder. Deborah Nicholls-Lee meets founder, and newly-elected Amsterdammer of the Year, Abdelhamid Idrissi to find out more.

‘Better grades is something that’s easy to achieve,’ says Abdelhamid Idrissi (29) from Slotermeer, who was voted Amsterdammer of the Year in January, amassing around a third of all the votes cast. ‘Everybody can do that,’ he explains. ‘But if someone is not happy, if someone has a lot of problems in their head, they can’t think about maths or geography.’

In 2010, Idrissi founded Studiezalen: quiet, nurturing spaces in deprived areas of Amsterdam Nieuw-West and Noord, where children aged 9 to 18 can receive homework help, mentoring and coaching to guide them through a challenging home and school life. The foundation is run by 60 volunteers aged 13 to 73 – including former pupils – and seven permanent members of staff.

Funding for the scheme is currently 60% self-sourced, with 10% coming from schools and 30% from the municipality. Places cost €10 a year or are free with the Stadspas. Under the umbrella of Idrissi’s foundation Positive Society, 24 locations support around 600 children each week. All have waiting lists.

Academic success is a bi-product of building self-esteem, explains Idrissi, whose Studiezalen adopt a holistic approach to improving the life chances of their pupils. ‘We have to know the priorities of the child and then we see the child smiling again, sleeping again – simply from the attention we are giving them.’

He gives the example of a female student whose facial hair problem saw her confidence and grades plummet at high school. Cultural norms made it hard for her to discuss it with her Indian parents so the Studiezalen tactfully intervened, discussed treatment and – in time – restored her morale. Her grades recovered and she went on to attend medical school.

Idrissi is used to fielding questions from students about issues as varied as bullying, body odour and sexting and sees addressing these anxieties as an important foundation for raising achievement.

‘This isn’t only homework help,’ he explains. ‘We are also making a connection and building trust with the children and then they feel good about talking about their problems and the bad things in life, but also their dreams, their wishes and their goals.’

I visit the Honingraat on the Slotermeerlaan: a cheerful community centre where two study rooms are based, one for primary school pupils and one for secondary. ‘Here we sometimes have 20 children from 15 different schools,’ explains Idrissi. ‘So you can make new friends and a new start.’

There’s a photocopier and computers, and a hushed atmosphere as the children work grouped around tables. On the counter, the bowls of fruit donated by the Albert Heijn – a bid to tackle the obesity problem in this community – are gradually being accepted by the students who, Idrissi tells me, initially thought it was uncool to eat healthily.

The son of illiterate, first-generation immigrants, Idrissi still lives in a poor neighbourhood close to where he grew up and is familiar with some of the challenges faced by his mentees. He cites crowded housing and lack of education as factors affecting children’s attainment but says: ‘the biggest problem I saw was that they don’t have any role models or network.’

It was working as a team leader at his local supermarket where he first recognised the impact of lending an ear to the young people he managed. ‘I liked to be interested in their life and that’s something they weren’t used to, and they liked it a lot.’ He was amazed at how much difference his mentoring made to their wellbeing. ‘I noticed my power,’ he says.

The studiezalen frequently call on the network of the students and volunteers to provide solid role-models. When applications for internships had been repeatedly turned down for three of his students, the class pooled their ideas and their connections.

Within ten minutes, remembers Idrissi, calls and messages were flooding in and the problem was solved. Each of the three girls went on to make a successful application. ‘A lot of children are scared to make mistakes,’ he says. ‘They want to be successful and they don’t know how to do that and so they give up too soon.’

The support of the parents is also a crucial resource. All the Studiezalen’s students must write an application letter and attend an intake meeting with their parents where a collaborative approach is emphasised.

‘If you build something in the studiezaal, a parent can destroy it in a second, so you have to work with the parents for it to have a lasting effect,’ says Idrissi, whose phone buzzes throughout our conversation with parents eager to make contact.

He phones home to compliment parents when children are making good progress, but he is open to giving them a ticking off too. It took one father six months to see what his daughter was doing at the Honingraat, recalls Idrissi, who told him bluntly: ‘If it were my daughter, I’d be much more involved. Why aren’t you?’ ‘Now he is the most involved father we have,’ he tells me, and the inspiration behind the fathers’ group now organised by the foundation.

Amsterdammer of the Year

Idrissi smiles when I ask him about the Amsterdammer of the Year award. ‘It gave the foundation a lot of exposure,’ he says, which he hopes will help the scheme get the funding it needs to continue. It was also very special for his family: ‘My grandpa was crying – and my mother, father and wife were very happy.’

When you work a 10-12-hour day and sometimes sneak off to the office at the weekend when you’re meant to be getting groceries, he confides, the award goes some way to making it up to your wife and young children. Idrissi was also recently named World Ambassador for One Young World, a global forum for social impact leaders.

Before I leave, I meet Farah (17), a mouse-like trade school (vmbo) student who tells me in a soft, quiet voice that she is resitting the year after struggling in economics. ‘It feels so nice. It feels so comfortable,’ she says, when I ask her about the Studiezalen.

‘I was a bit shy because … I wasn’t great at maths and I was scared of someone bullying me or something.’ Here, she says, ‘the teachers are patient, and they have different ways of explaining something … I can see that my marks are much higher and I feel more confident about it.’

When our time is up, Farah lingers at the end expectantly. Eventually, I realise that she’s waiting for me to shake her hand: it’s Studiezalen policy. A handshake is a sign of respect but also of a business-like self-assurance. Studiezalen have set her on the right path.