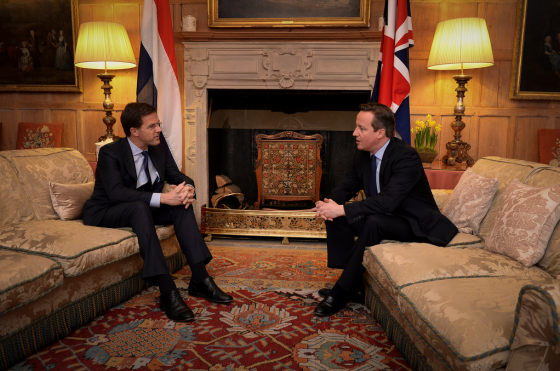 Apart from the British economy itself, it will be the Dutch economy which will be hardest hit if the Brits decide to leave the EU, warn economists Rick van der Ploeg and Willem Vermeend. The UK is one of this country’s most important trading partners and investors and a Brexit would result in an economic downturn and the loss of many thousands of jobs.

According to the polls, prime minister Mark Rutte’s second cabinet isn’t doing very well. Friends and foes are divided about why that should be, but according to the golden rule in The Hague political circles, there can only be one culprit and that is the coalition itself. The fact that the Netherlands is one of the best performing economies at this moment confirms this, and history teaches us that this can only benefit the ruling parties.

However, the polls are telling a different story. This month the OECD praised the Netherlands to the sky: things really couldn’t get much better. The economy will grow by 2.2% this year and by 2.5% in 2016, it predicted. And in 2017 it will grow by 2.7%. Unemployment will go down and the budget deficit will shrink to 0.7% of GDP in 2017 (Rutte 2 started out with a budget deficit of 4% of GDP) State debt will be among the lowest in Europe.

The cabinet hopes to breeze through its remaining mandate on the strength of this rosy picture and score a resounding victory at the general election in March 2017. That may be too optimistic.

Economic forecasts have a way of not materialising and there are always unforeseen circumstances to spoil the fun. Over the last decades the world economy has been fluctuating wildly, changing the prospects of individual economies almost overnight.

We are no prophets of doom but there are other scenarios to be considered apart from the optimistic OECD forecast. There are serious indications that the world economy will be slowing down from 2016, mainly because of a lower growth rate in emerging economies such as China. This will have a negative impact on open economies of which the Netherlands is one.

Growth will go down and unemployment will rise. Not only will the coalition have to field that blow, it will also have to cope with a society increasingly worried about the level of health care, care for the elderly, the power of Brussels and the refugee crisis.

There is another danger, closer to home. It’s the UK referendum about the British membership of the EU, to be held before 2017. Prime minister David Cameron told chairman of the European council Donald Tusk in a letter last week he wants speedy negotiations about a wish list that might possibly keep the Brits in.

Cameron wants more powers for national parliaments and a restriction of the rules surrounding European migration (EU migrants would have to wait four years before becoming eligible for benefits). He also wants better protection for countries outside the monetary union, such as Britain, from decisions made by the euro zone.

Most European leaders have already spoken of their concerns about the consequences of a possible Brexit. They feel Britain is a EU member that is difficult to please and predict that the population will vote for the pound in their pocket and reject a Brexit. The annual benefit of the EU membership for British households is between £1,200 and £3,500 (around €1,500 to €4,400).

Other EU countries are also pointing out that international think-tanks predict a Brexit would plunge the country into political and economic chaos. The British economy would be left reeling after taking a €80bn hit (around 2% of GDP) and unemployment would skyrocket. American economists are speaking of economic suicide while Barack Obama’s administration has made it clear that without EU membership Britain’s political role would be negligible.

Looking at the latest UK polls, these dramatic consequences haven’t hit home yet. Opinion is split down the middle, although the refugee crisis and a backlash over EU threats about a floundering UK are benefiting the Brexit camp.

There are some very good reasons why the EU should start negotiating with Cameron. For political and economic reasons the EU can’t afford to lose Britain as a member. Without it, the EU will lose economic strength and political influence and the risk that other countries will follow suit will become greater.

A Brexit would slice off one-sixth of European GDP and a quarter of the defence budget. Not only will the British economy suffer, the EU economy will take a pounding too. It also has to be noted that the British aren’t the only ones to be dissatisfied about what they see as too much EU interference. Many in the Netherlands feel the same.

If Britain leaves the EU, the Dutch economy will be hardest hit, apart from the British themselves. After Germany, Britain is our most important trading partner. Exports account for some €50bn and 300,000 jobs. With investments worth €180bn, Dutch companies are large-scale investors in Britain which in turn is one of the biggest international investors in the Dutch economy. A Brexit also means losing an important political partner in the EU and power will inevitably move even further towards France and Germany.

For Mark Rutte this should be enough reason to kickstart a European campaign to keep the UK in the European Union. His slogan should be: European when needed and national when possible. This means certain powers will be handed back to the member states and that cooperation in areas where nations share a common interest (security, employment) will be strengthened. In this, the British are our most important ally.

This article appeared earlier in the Telegraaf