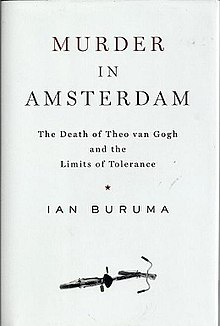 Published in 2006, Murder in Amsterdam explores the relationship between immigration in the Netherlands, particularly from Turkey and Morocco, and the 2004 murder of film director Theo van Gogh.

Van Gogh – 47 years old at the time of his death – was the great-grandson of Theo van Gogh, brother of famed Dutch painter Vincent van Gogh. Born and raised in The Hague, he first worked as a television producer and director and later became a newspaper columnist and author.

Van Gogh was intensely critical of religion, and Islam in particular. Shortly before his death, he had produced a 10 minute film critical of Islam called Submission, together with the Somali-born Dutch-American activist, Ayaan Hirsi Ali.

On November 2, 2004, van Gogh was cycling to work in Amsterdam when he was shot by Mohammed Bouyeri several times. Van Gogh managed to move behind a car, where witnesses said that he begged for his life before Bouyeri stabbed him in the chest with a machete, killing him. Bouyeri then pinned a death threat against Ayaan Hirsi Ali to van Gogh’s body.

Bouyeri was captured following a shootout with police and would later say he was motivated by his opposition to the movie. The son of Moroccan immigrants to the Netherlands, he had become increasingly fanatical in his beliefs and disaffected from Dutch society.

Murder in Amsterdam is part reporting, part essay. Buruma, who at the time was based in the US, describes his return to his childhood homeland, a place he hadn’t lived since 1975, and his knowledge and understanding of Dutch society is clear.

Much of the book is based on in-depth interviews with a wide-ranging group of subjects, from social workers to immigrants to Hirsi Ali herself. He follows the Netherlands as it moved from being a backwater to a multicultural society, looks at the history of immigration and attempts to define what made Bouyeri kill. The shadow of World War II is never far away.

When Murder in Amsterdam was published in 2006, just two years after the murder, it was described as a masterpiece and as having the control of a true-crime page-turner. ‘This brilliant piece of literary journalism – part autobiography, part reportage, part extended essay – unfolds with the narrative verve of a thriller, yet it artfully manages to pose a series of tough questions,’ said Caryl Phillips in the Times Literary Supplement

‘In Buruma’s fascinating book Holland comes across as a rather nasty little place filled with people whose smugness is matched only by their blunt rudeness,’ wrote Michael Burleigh in Britain’s Telegraph.

Since then, however, much has changed. The far right has become an entrenched part of the political landscape and the Netherlands has escaped the Jihadi terrorism of several of its neighbouring countries.

In addition, for all his attempts to ‘investigate the murder and its larger meaning,’ Buruma fails to contextualize a lot of information in the book. He quotes a young Muslim woman in the book as saying she wouldn’t want to live in Nigeria, ‘where they behead adulterous women’ but fails to note the population of Nigeria is roughly split between Christian and Muslim.

He cites a statistic that 45% of the population of Amsterdam was ‘of foreign origin’ without pointing out this is on par with most major European capitals and lower than London or New York City. Nor does he define what ‘foreign origin’ means.

Despite these few niggles, the book is rich with a history of migration probably unfamiliar to the average international living in the Netherlands, and which is still relevant today, 17 years after the murder. At 288 pages long, Murder in Amsterdam is worth a read for an instant history update but may seem a little outdated to some, and adds little to determining what the limits of tolerance in the Netherlands actually are.

Buy Murder in Amsterdam from the American Book Center.