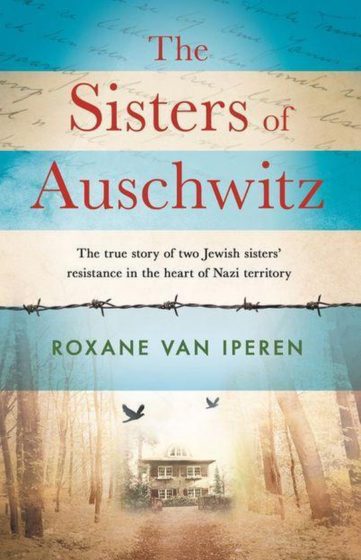 It’s a pity that the English language publishers of Roxane van Iperen’s ‘T Hooge Nest (the high nest) decided to change the name into The Sisters of Auschwitz, because your expectations are already set by the time you pick up the book.

And the Auschwitz connection, with the fleeting mentions of Anne and Margot Frank and all its grim reality, is only a minor part of the story. For this is the story of a house and its occupants, and their struggle to survive during the Nazi occupation of the Netherlands.

Van Iperen came across the story because she lives in the High Nest, and after moving in, she began to hear stories about the previous inhabitants. During renovations, she found old resistance newspapers and secret rooms. The High Nest clearly had a story to tell.

Slowly she began to put together the story of a forgotten part of Dutch World War II history – the role played by women, and Jewish women in particular.

The Brilleslijper sisters were active in the arts and the resistance. They stayed in Amsterdam until it was no longer safe and moved to the house on a wooded hill with their partners, their children and a host of others who had to hide from the Nazis.

‘A safe place to wait out the war is all they had asked for,’ writes Van Iperen as the family walk through the night to the house. ‘How much longer this war would last, no-one dared say. And not to be separated from the rest of the family – especially the children, like so many of their friends and acquaintances had been forced to.’

Van Iperen based the book on interviews with survivors and relatives, using diaries, love letters, Red Cross certificates and all manner of archives. ‘The family gave me access to everything I could think off,’ Van Iperen said at a book reading session at the ABC bookstore in Amsterdam. ‘That was the moment I thought I am not going to play safe.’

The result is a fast paced, page-turning narrative – even though you know that the inevitable will happen in the end.

The style is matter of fact but compassionate. ‘Everything on wheels is precious: prams, wheelbarrows, home-made cargo bikes and unicycles’, she writes.  The High Nest is ‘like a fortress: outside it seems heavy and robust but inside there is light and space – and for the first time in long while, the residents feel free to live, to move. Slowly, they speak out loud and laugh again.’

And even after the betrayal and eventual deportation, Van Iperen notes: ‘all the ugliness has not extinguished Lien’s voice’.

The book is written in the present tense, a popular Dutch literary tool but one which does take some getting used to in English. The translation by Joni Zwart feels a little odd on occasion but is never disturbing. It is an easy book to read, a non-fiction thriller full of plot twists and turns, despite the difficult subject matter.

The Sisters of Auschwitz is an essential book for anyone who wants to understand more about the Netherlands during the occupation, about ordinary and extraordinary people, about moral courage and about the will to survive.

Buy The Sisters of Auschwitz at the American Book Centre in Amsterdam, The Hague or Leidschendam, or online.