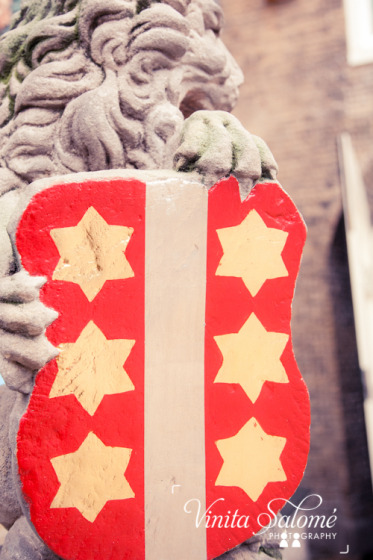 Cheese. Hard, tasty, bright yellow cheese. That’s what appears in many people’s minds when they think of Gouda.

But of course the cheese gets its name from a very historical little city in the South of Holland that’s featured in The Bee’s Tour of Gouda: Buzzing Through Vinita’s Lens.

Author Persephone Abbott and photographer Vinita Salom have lovingly researched their hometown and created a suggested walking route that takes in the beautiful city of Gouda in a historical, cultural and pictorial manner.

At only 70 pages long and handy A5 size, it’s an ideal travelling companion should you fancy an educational ramble around a little city that began as a settlement in the Middle Ages, built around a fortified castle.

It would be fair to point out however, that this baedeker would suit seasoned visitors and tourists, prepared to pore over and decipher the hand drawn maps, as opposed to baseball-capped Floridians and the like, who might find it too intricate if they are attempting to do the entire Netherlands in a couple of days.

Despite the obvious research that has gone into creating this packed little guide, it has the feel of an economically produced booklet rather than the book it strives to be.

If you are looking for accommodation or places to eat and drink, then Tour of Gouda will not be of much use, but if you’re interested in Gouda’s history, then this will certainly educate and fulfill the more enlightened traveler.