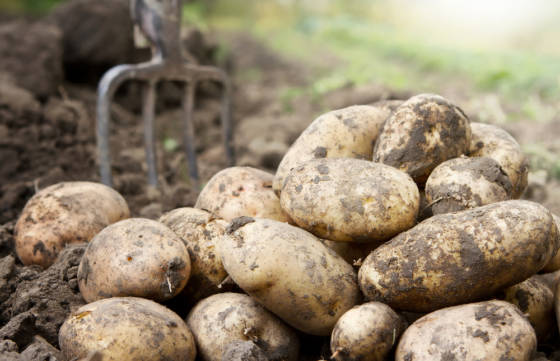 Dutch supermarkets and potato growers have agreed to promote ‘sturdy potatoes’ over varieties that need harmful pesticides in an effort to help the environment.

The seven main seven supermarket chains, including market leader Albert Heijn, and eleven of the largest growers in the Netherlands will be phasing out such potato staples as the bintje, frieslander and agria because they are vulnerable to diseases like Phytophthora which require large quantities of pesticide.

Growers will instead concentrate on 32 new varieties which can hold their own against diseases.

‘It was high time we took this step,’ director of organic farmers association Bionext Michaël Wilde, told the Financieele Dagblad.

‘The sector has been working on disease resistant potato varieties in the last couple of years and that is why we can now switch completely to organically grown potatoes. Consumers can help farmers by opting for these potatoes,’ Wilde said.

Phytophthora, or potato blight, which caused the Irish potato famine of 1845, is still regarded as a menace by growers, causing estimated damage around the world of between €6 billion and €7 billion a year. In the Netherlands some €150 million worth of potato plants are affected each year, Wageningen university researcher Geert Kessel said.

Of the five million kilos of pesticides used annually on Dutch produce, 2.2 million is used to protect potatoes against Phytophthora.

Potato variety developers Agrico, which is a partner in the agreement, is responsible for half of the robust varieties on the market, such as alouette, carolus, twinner and vitabella.

‘We started this process 40 years ago,‘ director Jan van Hoogen told the paper . Agrico’s potatoes have not one but two genes to ward off disease. The company is now looking at varieties with up to five resistant genes so as not to get caught out by diseases that may crop up in future. ‘It’s a never ending race,’ Kessel said.