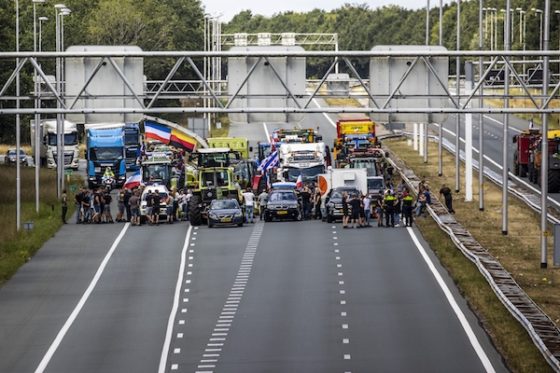 Campaigners blocked the A35 motorway for a time on Thursday. Photo: Vincent Jannink ANP

Radical farmers again dumped rubbish on roads and set fire to bales of hay overnight, as their campaign against the government’s strategy to combat nitrogen-based pollution continued.

Asbestos was found at two of the 14 locations where farm and building waste had been dumped, local media reported.

Most of the rubbish was cleared up before rush hour and there were no road closures on Friday morning. Nevertheless, the government’s highways agency urged motorists to be extra careful and to remain aware they could come across obstacles on the roads.

The agency said on Thursday evening that it would make formal police complaints about the vandalism and the threats levied at workers drafted in to clean up the mess, as well as trying to recover the cost of the clean up from the farmers themselves.

‘Our people are being threatened and intimidated,’ director general Michèle Blom told a television talk show. It is also a ‘miracle’ that there have only been three accidents so far because of the dumping, she said.

Police said on Friday they had made their first arrest, that of a 42-year-old man who was caught red handed dumping rubbish on the A18 on Thursday evening.

Meanwhile, the country’s main farming union LTO has now said it will sit down to talks with the government’s mediator Johan Remkes, following the reported intervention of prime minister Mark Rutte in a phone call.

The move appears to have only increased the divide between the bulk of the farming community and its radical flanks, with the head of one group, the Farmers Defence Force describing the news as a ‘betrayal’.

Former farm minister Cees Veerman, who is an arable farmer himself, told broadcaster NOS the government had made a mistake in its approach.

Much of the farmers’ anger stems from the publication of a map of the Netherlands which shows where nitrogen emissions need to be cut and by how much. Many farmers took this to mean that their farm would have to close.

Nationwide, the government has set a target of a 50% cut in nitrogen emissions by 2030, in order to meet EU nature protection targets. Government officials are divided about how many farms will have to close down or reduce their livestock to meet the deadline.