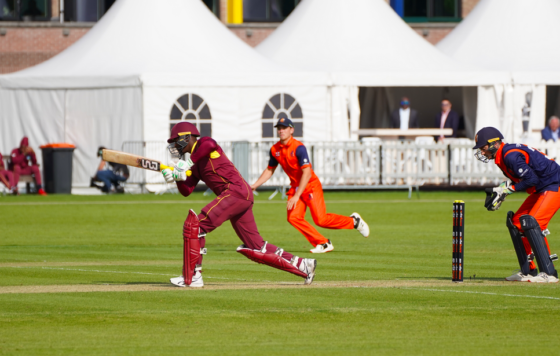 The Netherlands’ Teja Nidamanuru’s valiant unbeaten half-century on debut went in vain as the West Indies wrapped up a comprehensive seven-wicket victory with 11 balls to spare in the first One Day International in Amstelveen.

In pursuit of 247 runs, adjusted due to a rain delay, Shai Hope led the visitors’ chase with an unbeaten 119 and was ably supported by opener Shamarh Brooks and Brandon King, each registering a half-century of their own.

Having lost the toss and inserted to bat, the Netherlands raced to 51 at the end of the power play (10 overs) as Vikram Singh struck an attacking 45-ball 47, a knock that featured six boundaries and two sixes. His innings was laced with fluent cover drives and two pulled sixes over fine leg off Anderson Phillip as he scored the bulk of the runs in a 63-run first wicket partnership with Max O’Dowd (39).

The Dutch slid from 102-1 to 155-5 struggling to contend with leg spinner Hayden Walsh (1/47), who accounted for O’Dowd bowled off a quicker delivery, and left-arm spinner Akeal Hosein (2/29), who dismissed Singh and Musa Nadeem Ahmed in similar fashion – adjudged LBW.

The match was reduced to 45-overs-a-side after a two-hour rain interruption with the Dutch losing wickets either side of the delay. However, Nidanamaru, on debut, led the Dutch fightback with a 55-run partnership for the seventh wicket alongside Logan van Beek. His unbeaten 51-ball 58, which included three boundaries and two sixes, ensured the Dutch posted a strong 240 for 7.

In response, the West Indian openers, Shai Hope and Shamarh Brooks, forged a 120-run partnership for the first-wicket and laid a strong foundation for the chase. However, neither of the batters batted without luck. While some balls nearly took the bat’s edge, others did not carry to the fielders. On one instance, left-arm spinner Pieter Seelaar’s delivery hit the stumps but failed to dislodge the bails.

However, van Beek struck off consecutive deliveries in the 24th over to swing the momentum in the home team’s favour by dismissing Brooks for 60, a caught and bowled, followed by a successful LBW shout to send back Nkrumah Bonner.

Three overs later, off-spinner Aryan Dutt skidded a quicker delivery to shatter West Indian captain Nicholas Pooran’s stumps for the third breakthrough. With 114 runs still needed, Brandon King (58*) joined hands with Hope to steer the run chase home with an unbeaten 116-run partnership. In the process, Hope brought up his 11th International century, a knock replete with 12 boundaries and two sixes, and fittingly hit the winning runs in the 44th over.

‘Vikram Singh, at the start, looked very comfortable and aggressive. It was very good to watch,’ said skipper Seelaar after the game when asked to reflect on the takeaways. ‘Teja Nidamanuru, on debut, played a fantastic knock but if we want to win, we have to post a little bit more [on the board]. That was good but not enough to beat the West Indies.

‘Even with the ball, there were, at times, too many loose balls and too much width. I would say we need to tighten up on every facet of the game.’

The sides meet again on Thursday, June 2 for the second ODI at the same venue.