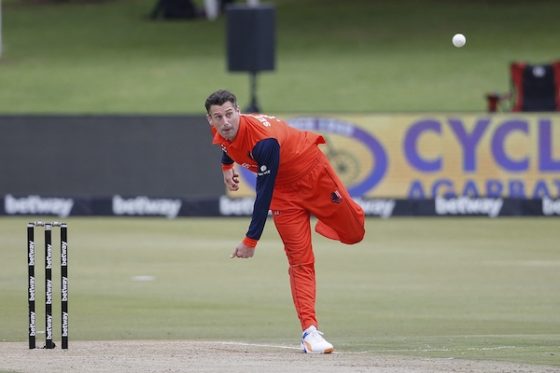 Dutch cricket captain Pieter Seelaar has called time on a storied, 17-year international career due to a persistent back injury.

Seelaar, 34, made his debut for the Netherlands in 2005 in the NatWest Trophy against Warwickshire and went on to play 261 games across all formats for the country.

‘I was a proper No. 11,’ Seelaar told Dutch News as he reflected on his journey. ‘My mindset was I’m always willing to improve. One of the key things I have shown throughout my career is that I was never scared and always tried to be better. That takes a lot of hard work, I suppose, if you are not very talented, especially with batting. I found a way to score runs, it may not have been pretty but it was effective at times.’

His most notable contributions with the bat featured a first-class century in an Intercontinental Cup match against Hong Kong in 2017, scoring 138* and sharing a record-breaking sixth-wicket partnership of 288 with Ben Cooper.

He also scored an unbeaten 49-ball 94 against Scotland in a T20I in 2019 chasing 245 in vain. He was generally economical with the ball, often bowling with good control and set high standards with his exceptional fielding.

When Peter Borren called time on his International career in 2018, Seelaar emerged as the frontrunner to take over the reins as KNCB opted for a home-based captain not hindered by other cricket commitments overseas.

‘In terms of captaincy, I grew into the role quite nicely,’ Seelaar said. ‘We were in the World Cup Qualifiers in Zimbabwe in 2018. We failed to qualify in that tournament and after it, I felt I wasn’t going anywhere with my cricket. At that stage, I was batting at No. 9 and wasn’t bowling all the time, especially with Roelof [van der Merwe] around. I wondered, ‘do I still want to be around this?’

‘Coming back to Holland, I told people close to me that I didn’t really enjoy the game. To be then offered the captaincy role was a massive turnaround as it wasn’t expected. After deliberating it for a while, it was quite interesting. It was only better for me because I felt, apart from deciding yourself how many overs you bowled, where you batted, there is so much else that comes with it.’

‘I would like to think I was a good team guy. The most interesting part of the captaincy is that now you were actually managing players. You have got the games and you decide who bowls when and what fields to set. It’s cool, don’t get me wrong, but the whole player management where you have 15-20 different characters to manage and I tried to be as good as I could be.’

Quite remarkably, he led the Dutch to victory in the World T20 Qualifier in Dubai in 2019 to book their place in the T20 World Cup held in UAE in 2021. His career also included a grim period when the Netherlands lost ODI status in 2014, resulting in the KNCB losing a significant chunk of their funding. At the time, Seelaar worked in hospitality at a golf course and as a chauffeur off the cricket field.

Asked what his most treasured memories as an international were, he pointed to the win over England in the 2009 T20 World Cup alongside winning the World Cricket League in 2017 to regain the Dutch ODI status and confirm their place as the 13th team in the ongoing World Cup Super League.

‘My journey from a proper No. 11, who just bowled some left-arm spin, to now trying to read the game well, managing players and not just focusing on whether you are going to have a good day with the ball, required a fairly different mentality.

‘You woke up on a match day and as a captain, I didn’t care as much about what I did as the team winning. There were some real highs and definitely some real lows but that forms you into the person that you are today.’

Seelaar made the announcement shortly before the conclusion of the 2nd ODI against England in Amstelveen on Sunday. The final ODI in the series against England takes place on Wednesday.

Wicket keeper-batsman Scott Edwards will take over as captain.