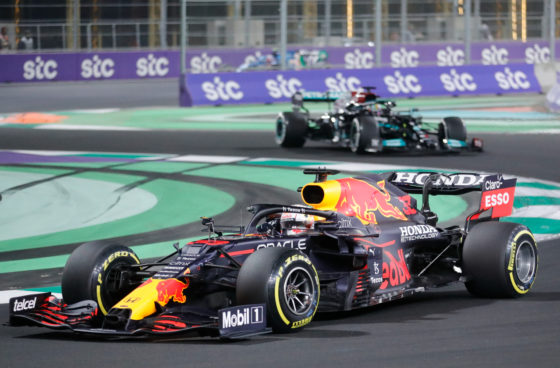 Max Verstappen will go into the final Grand Prix race of the season level on points with world champion Lewis Hamilton after a dramatic race in Saudi Arabia that ended in angry words from both drivers.

Verstappen said he had been unfairly penalised by the stewards, once during the race and once afterwards, which left him with a 15-second time penalty.

Hamilton, meanwhile, accused his rival of being ‘over the limit for sure’ following a series of incidents during the race, including a collision that left his Mercedes with a damaged front wing.

‘I’ve come across a lot of different characters and there’s a few at the top which are over the limit. Rules kind of don’t apply, or they don’t think of the rules,’ he said.

In a Grand Prix punctuated by collisions, Verstappen received his first sanction for going off the track as he passed Hamilton straight after the race restarted on lap 17.

The race was stopped again because of a crash further down the field, after which Verstappen was ordered to restart from third place because of the illegal overtaking manoeuvre.

But the real flashpoint came on lap 37 when the two cars touched after Verstappen’s Red Bull team ordered him to let Hamilton pass because Verstappen had run off the track to hold his lead.

Verstappen slowed down to let the world champion past and then braked harder, causing Hamilton to run into the back of him and damage his front wing.

‘He hit the brakes so hard, and I nearly went completely up the back of him and took us both out,’ Hamilton said. ‘For him, it doesn’t matter if we don’t both finish. For me, we both need to finish.’

Verstappen claimed he was following the order to let Hamilton pass, but after the race he was penalised 10 seconds because the stewards ruled his braking was ‘erratic and hence the predominant cause of the collision.’

‘They told me to give the position back, and so immediately when I heard that on the radio I just pulled off to the right, showing that I was going to move over, and I braked, downshifted, and he just stayed behind me,’ Verstappen said. ‘I think there was a bit of a miscommunication and he ran into the back of me.’

Hamilton claimed it was a tactical move to enable Verstappen to regain the lead on the next corner by engaging the DRS mechanism.

Five laps later the Dutchman left the track as Hamilton tried to pass him, earning a five-second penalty from the stewards. Hamilton then appeared to shove Verstappen wide as he finally got past on lap 44 and went on to win by 11.8 seconds.

Verstappen said the penalty was unfair and cost him the chance of winning the race, because he was unable to make up the time on the track. ‘When they told me that I had the five-second penalty, it was not worth fighting anymore because I would never pull a gap of five seconds,’ he said.

The outcome means both drivers have 369.5 points going into the final Grand Prix in Abu Dhabi next weekend, but Verstappen leads the championship by virtue of having won nine races to Hamilton’s eight.

‘We are equal on points now and I think that’s really exciting of course for the whole championship and Formula 1 in general,’ Verstappen said. ‘It will be decided there, so hopefully we have a good weekend.’