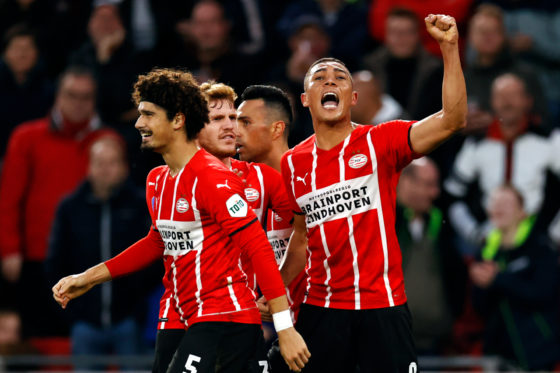 PSV closed the gap at the top of the Eredivisie to two points after overcoming a shaky start to win 5-2 against Twente.

Twente started brightly in the Phillips Stadium, went ahead through Michel Vlap and were level at the break thanks to a long-range strike by Ramiz Zerrouki, But Brazilian striker Vinîcius settled the match with his first two goals for PSV in the second half.

Coach Roger Schmidt said his team needed to shake off the hangover of last weekend’s 5-0 drubbing by Ajax. ‘We have to defend better as a team,’ he said. ‘We weren’t well organised for their first goal. The second was a fine goal from 25 metres, but it happened after we lost the ball needlessly.’

Ajax dropped points with a goalless draw on the artificial pitch at Heracles, but it could have been worse had goalkeeper Remko Pasveer not been on top form. Coach Erik ten Hag hinted that Pasveer could keep his place when André Onana’s doping suspension ends next month.

Utrecht’s Bart Ramselaar was the individual star of the weekend, scoring a hat-trick in a 5-1 win over Willem II to keep his team in third place. Ramselaar’s first goal was the pick of the bunch, squeezing the ball through a defender’s legs and under the diving Timon Wellenreuther.

Fourth-placed Feyenoord left it late against local rivals Sparta, with Cyriel Dessers firing in from a corner in the 92nd minute to snatch all three points.

Vitesse Arnhem had to play for 80 minutes against Heerenveen with 10 men following the early dismissal of Ibrahim Dresevic, but still came from behind to win with an injury-time header by Lois Openda. The striker earlier scored a controversial equaliser from a move that began when the ball rebounded off referee Martin van den Kerkhof.

At the other end of the table, PEC Zwolle surrendered an early lead for the second week running to come away from Alkmaar empty-handed. Mees de Wit struck twice for PEC in the first 13 minutes, but AZ were level by half-time and claimed the points seven minutes after the break with Vangelis Pavlidis’s second goal of the game.

NEC Nijmegen overcame the handicap of playing in an empty stadium following the collapse of part of a stand two weeks ago to notch up a 3-0 win against Groningen. Ali Akman, Elayis Tavsan and Jonathan Okita were on target as fans surrounded the stadium to cheer their team on.

Go Ahead Eagles staged a spectacular comeback against Fortuna Sittard with two goals in the last seven minutes, having gone 3-1 down early in the second half. Joris Kramer set up the equaliser for Inigo Cordoba in the 83rd minute before heading the winner from a corner six minutes later.

Cambuur Leeuwarden ended a run of three successive defeats in torrential rain in Waalwijk as Issa Kallon tapped in from close range following some slack defending by RKC.