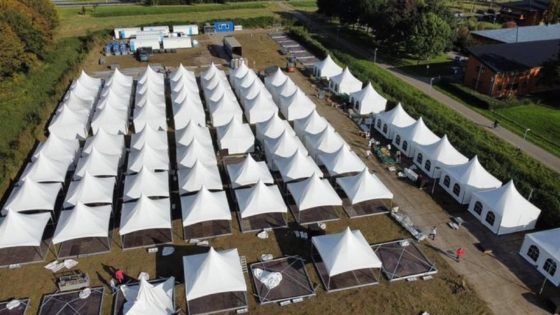 The tent camp in Almere. Photo: Ministry of Defence

Soldiers were drafted in to put up marquees as emergency accommodation for 450 refugees in Almere this weekend.

The first asylum seekers arrived at the location on Sunday and some 200 are due to be housed in the tents on Monday, refugee settlement agency COA said.

The tents will be used for two weeks while temporary housing is erected on the site, which will remain there for a maximum of one year.

All refugee centres in the Netherlands are currently full, including emergency centres and people have been sleeping on chairs and camp beds in Ter Apel, where all new arrivals report to be registered.

The shortage of accommodation is due both an increase in refugee numbers and to the nationwide housing crisis, which means there is nowhere for asylum seekers who have been granted refugee status to move to.

Some 11,000 out of 30,000 beds in regular refugee centres are currently lived in by people who have residency permits and are waiting to be settled in normal housing. In addition, thousands of people are still waiting for their cases to be assessed by the immigration service IND.

Tilburg mayor Theo Weterings told television current affairs show Nieuwsuur on Sunday night that just one of the 12 Dutch provinces had submitted plans for new refugee housing, even though this should have been done last year.

National, provincial and local government agreed 18 months ago that there was a need for more flexible housing for refugees and that every province would produce a plan by the end of 2020.

The delays are due to the difficulty of finding suitable locations, he said.

The last time emergency beds were needed was in 2015, when thousands of Syrian refugees came to the Netherlands.