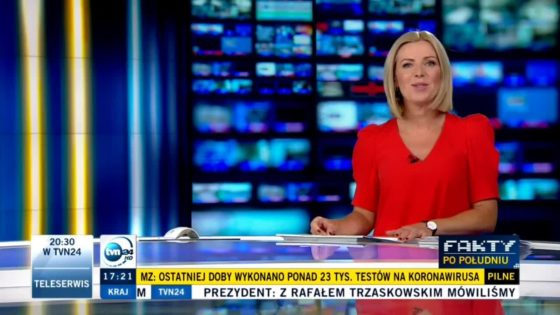 Poland’s most popular news channel has been given a Dutch broadcasting licence to get around a proposed new law restricting foreign media ownership.

TVN24, which is owned by the Discovery Group, faced being taken off the air when its licence expired on September 26, after the lower house of parliament passed a bill preventing Polish media organisations being majority owned by non-EU companies.

The new law has prompted street protests in Warsaw and is seen as directly targeting TVN24, the only major broadcaster that is openly critical of the government, which is led by the conservative nationalist Law and Justice (PiS) party.

The Polish government says the law is necessary to protect its broadcasting sector from the influence of authoritarian or corrupt regimes. The law still has to be passed by the senate and president Andrzej Duda.

Discovery said it applied for a Dutch licence in July after the decision on renewing TVN24’s domestic licence was delayed, so that it could continue broadcasting under European Union freedom of movement rules.

The company said in a statement: ‘In the event the National Broadcasting Council does not renew the TVN24 license by the 26th of September, it will be the Dutch license that will allow us, in accordance with Polish and EU law, to continue broadcasting,

‘However, we still believe that we will not be forced to use it. We meet all the requirements to obtain a renewal of the license in Poland, and therefore appeal for it to be granted immediately.’

Discovery also intends to take legal action under the bilateral investment treaty between the United States and Poland against what it describes as the ‘discriminatory’ action of the Polish government.