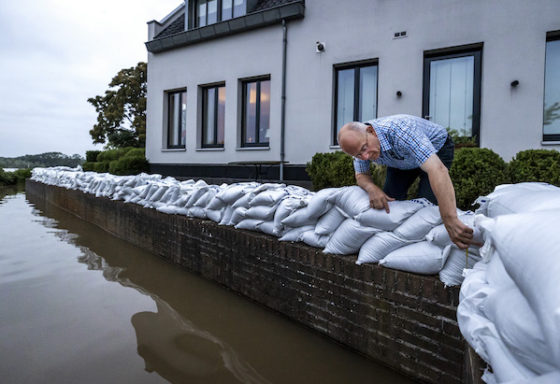 A local in the village of Arcen reinforces his garden wall. Photo: Remko de Waal ANP

The high volumes of water which have caused flooding in southern parts of Limburg reached the north of the province on Saturday, with evacuations in Roermond and Venlo.

Some 10,000 people in Venlo and several thousand in Roermond were told to leave their homes overnight as a precaution. In some places, dykes and river walls have been reinforced with sandbags by the army working together with volunteers in an effort to keep out the flood waters.

The water level in Venlo is expected to reach its peak at 7pm on Saturday evening and could last until Sunday evening, officials say.

In the far south, where hundreds of people had been evacuated following a reported breach in the Juliana canal wall, officials now say water and sand had been seeping through at the bottom of the dyke instead.

Nevertheless, the floods have caused widespread damage. Valkenburg was hit by the worst of the flooding and one bridge was washed away. There the clean-up operation is now under way. 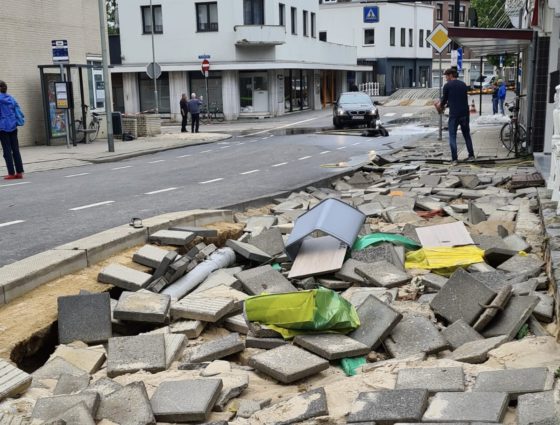 Dutch prime minister Mark Rutte has visited the worst affected parts of Limburg on Friday evening and said the country had been fortunate not to have any deaths, as has happened in Germany and Belgium.

Asked if the floods should be looked at in relation to climate change, Rutte said that was ‘undoubtedly the case’.

‘There really is something going on here,’ Rutte said, before going on to say it would not be appropriate to make firm statements at present. ‘We need to find out together how it is that so much water fell for so long,’ the prime minister said.

German politicians earlier made a link between the floods, which have cost over 100 lives in Germany, and climate change, as have Belgian and EU leaders.

Meanwhile the water and safety boards in Brabant and Gelderland provinces say they are not expecting any problems when the high water volume from both Limburg and Germany reaches them via the Maas and the Rhine. 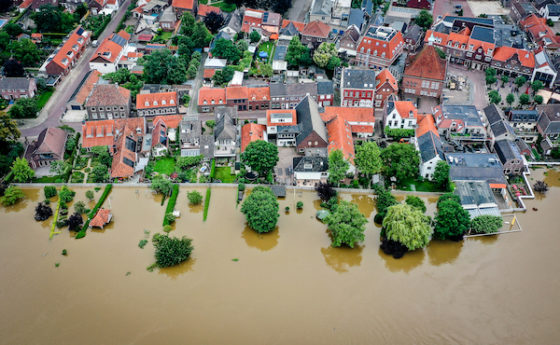 ‘The flood plains will fill up, but that is what they are meant to do,’ a spokesman for Gelderland-Zuid safety board said.

Although the river levels will rise considerably, they will be well below the maximum level the dykes can take. ‘The Maas does not have much space when it enters the Netherlands and all the rain water from the hilly region is an added impact,’ Freek Jochems of the Rivierland water board told website Nu.nl.

‘But the river is much wider in Brabant and Gelderland so the water level does not rise as much,’ he said. ‘We are expecting record volumes of water, but without any major problems.’

Some cattle may have to be moved to higher ground and campsites along the edge of the rivers will have to be evacuated, Nu.nl said.

Footpaths and cycle lanes across the flood plains are also being closed to allow small animals to get to safety without being disturbed by walkers and cyclists.

Wellwishers have so far donated over €1m to the national disaster fund via the special Giro 777 number.

The government has declared the floods to be an official disaster which means the government will pick up some of the cost of the damage.