Fewer people moved to the Netherlands during the pandemic than in previous years and coronavirus really kept non-EU nationals away, national statistics office CBS said on Wednesday.

In 2020, 171,000 people without Dutch nationality moved to the Netherlands, 44,000 fewer than in 2019. Migrants from outside of the European Union were especially put off by the pandemic, their numbers were down by one-third. 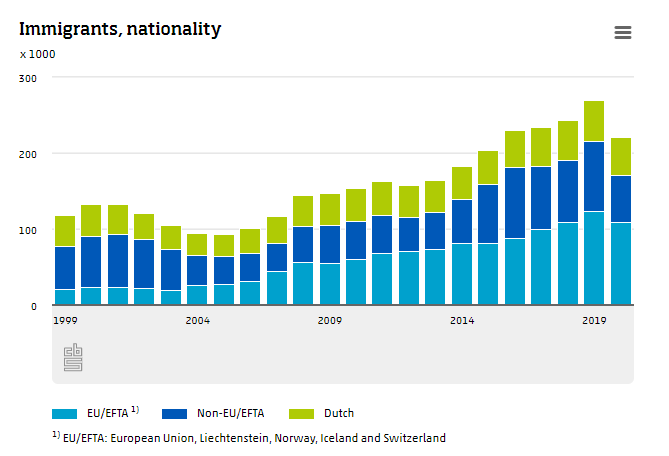 Of those 171,000, 108,000 came from the European Union or European Free Trade Association countries (Liechtenstein, Norway, Iceland and Switzerland.) The remaining 61,000 were from elsewhere in the world. In 2019, 91,000 non EU/EFTA nationals relocated to the Netherlands.

For the past several years, immigration to the Netherlands had been on the rise. At its peak in 2019, 215,000 people moved to the country, a mix of students, those moving for work and asylum seekers.

Immigration numbers have been picking up since the start of the year, as borders have reopened. While the numbers in January and February were still down, in March, April and May, more people moved to the Netherlands than in those months in 2020.