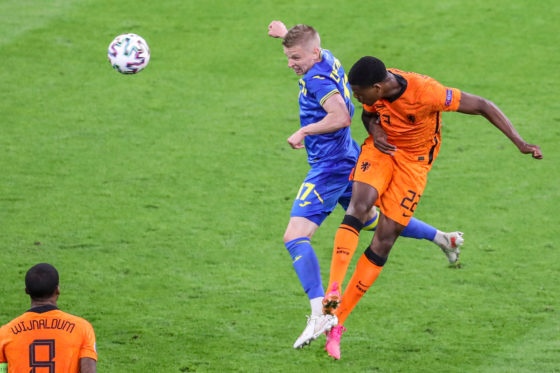 Netherlands goal hero Denzel Dumfries said the team will learn the lessons of their opening victory against Ukraine after they surrendered a 2-0 lead late in the game.

The Feyenoord right-back headed in his first international goal for the Netherlands in the 85th minute to clinch a dramatic win, shortly after Ukraine had scored twice in five minutes.

‘We started the second half well and scored two good goals, but then you need to kill off the game and we neglected to do that,’ Dumfries told NOS. ‘We know we need to be better, but it’s still a good start to get the three points.’

The Dutch will qualify for the second round if they win their next match against Austria on Thursday, provided Ukraine avoid defeat against North Macedonia.

The prospect of a second-round match on June 26 will add to pressure on the government to allow fans to watch the later stages on giant screens.

The issue is expected to be raised when members of the safety council meet justice minister Ferd Grapperhaus on Monday evening. Outdoor public screenings are banned under the current coronavirus restrictions, but could be allowed when the rules are further relaxed on June 30.

‘We are all reading how well things are going with the vaccination and the virus in the Netherlands,’ Hubert Bruls, chair of the safety council, told NOS. ‘But as long as the current rules are in force, until June 30, we have to ensure that large groups of people do not gather on outdoor terraces or market squares.’

Meanwhile, riot police broke up disturbances in The Hague on Sunday night as some celebrations after the game turned violent.

Bicycles, a portable toilet and other objects were set on fire on Jonckbloedplein, in the Laakkwartier area, where more than 100 people had gathered to play football in the street.

Police held a watching brief for several hours and diverted trams from the area, but moved in just after midnight as the atmosphere deteriorated. Bus stops were destroyed and fireworks were set off by the rioters, who also threw paving stones at the police.

Police did not say if anybody was arrested at the scene, but at least one person was arrested when unrest also broke out on Kaapseplein in the Schilderswijk.