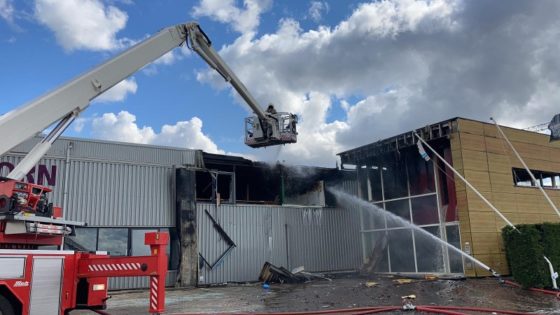 The aftermath of the fire. Photo: Politie.nl

Three people killed in a major fire in an apartment above company premises in Werkendam, south east of Rotterdam have been confirmed to be Lithuanian nationals who worked in the Netherlands as carpenters.

The bodies were found by firefighters after the blaze had been put out – which had taken several hours. Fire broke out in the building at around 8am on Sunday but it was not under control until almost 4pm.

The waterfront building was used by a carpentry and interior construction firm, which worked for the shipbuilding industry.

According to company owner Dick Hoogendoorn, the three men who died worked for another company which did business with his. ‘This is terrible news,’ he told local broadcaster Omroep Brabant.

Several other people living in another apartment on the complex were able to escape the fire in time.

In total, 200 to 250 firefighters worked to get the blaze under control, police said.

Note: this story has been updated to include the nationality of the men who died.