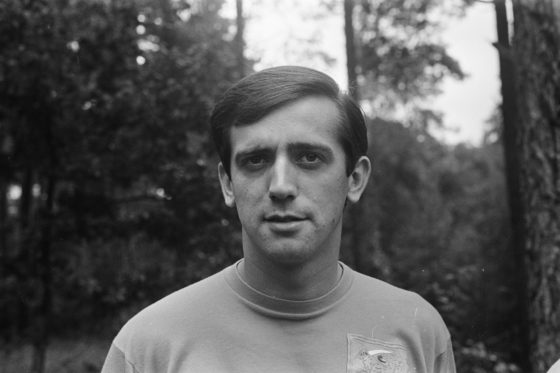 Will van der Kuijlen training with the Dutch national team in 1968. Photo: Anefo via Wikipedia

The Eredivisie’s all-time record goalscorer, Willy van der Kuijlen, has died at the age of 74, his former club PSV Eindhoven has announced.

Van der Kuijlen played for the Eindhoven club for 18 seasons between 1964 and 1981, scoring 308 times in 528 matches. He also scored three league goals for his only other professional club, MVV Maastricht.

Born in Helmond, Van der Kuijlen caught the eye of PSV’s scouts while playing for his home town amateur club HVV. He signed professional terms as a 17-year-old and stayed loyal to PSV throughout his career, rejecting offers from clubs including Real Madrid.

In a statement on its website, the club said: ‘As a two-footed player he will always be remembered for his technical skills, but above all for his goal-scoring prowess. Willy van der Kuijlen is and will be Mister PSV, forever.’

Van der Kuijlen’s international career was limited to 22 caps and seven goals, partly because of a difficult relationship with his contemporary, Johan Cruyff. Despite being Eredivisie top scorer three times he was not included in the squads for the 1974 and 1978 World Cup tournaments.

At PSV he won three league titles, two Dutch cups and the UEFA Cup in 1978. A statue in his honour was erected outside the Phillips Stadium in 2004.