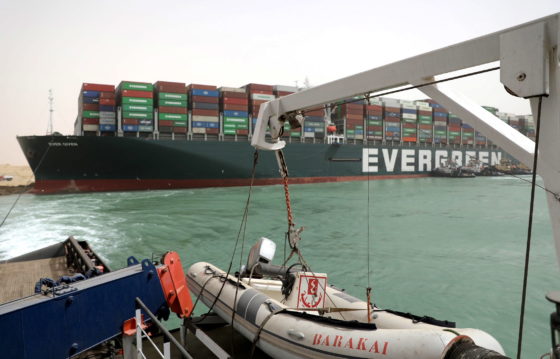 The Ever Given container ship during the salvage operation. Photo: EPA/Suez Canal Authority

The giant container ship Ever Given is on its way to Rotterdam after being refloated in the Suez canal, Dutch salvage company Boskalis confirmed on Monday.

The bow of the 224,000 tonne vessel was freed at around 3pm CET, ending a six-day blockade of the sea channel that carries 12% of global trade.

Dredgers had to move 30,000 tonnes of sand to free the ship, which was wedged diagonally across the canal with its bow stuck in the clay-heavy soil on the east bank. Eleven tugboats and two sea tugs were involved in the operation.

Boskalis CEO Peter Berdowski said he was ‘extremely proud’ of the successful mission to free the Ever Given, given the ‘unprecedented time pressure’. More than 300 cargo ships were queued behind the vessel, while others had to divert around the Cape of Good Hope at a cost of several days.

The Ever Given will be inspected in one of the Suez canal basins before continuing on its journey to Rotterdam.