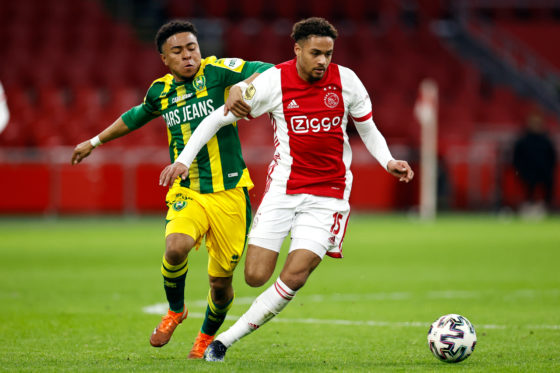 Ajax overpowered ADO Den Haag to go 11 points clear in the Eredivisie as AZ Alkmaar opened up the battle for the second Champions League spot with a 2-0 win over PSV.

Teenager Devyne Rensch scored Ajax’s opening goal and set up two others as positive corona tests for Sébastien Haller and Jurriën Timber forced Erik ten Hag to make changes. Davy Klaassen made the score 5-0 after just 50 minutes, after which the leaders eased off.

AZ took an early lead in Alkmaar when Jesper Karlsson rounded off a jinking run with a low shot into the corner. Mario Götze missed two good chances for PSV before Karlsson set up captain Teun Koopmeiners to fire in the second in the 68th minute.

Vitesse missed a chance to move to within a point of second place as they could only draw 0-0 with Willem II, who moved out of the play-off zone on goal difference.

VVV are now in 16th place after they extended their losing streak to eight matches, going down 2-1 to PEC Zwolle. Thomas Lam scored the winner from the penalty spot on 79 minutes, after PEC’s Slobodan Tedic had opened the scoring with his first Eredivisie goal.

ADO’s defeat in Amsterdam means Emmen moved off the bottom on goal difference after claiming a point away to Feyenoord in a match both teams needed to win.

Orkün Kökçü put Feyenoord ahead when his shot was deflected past a stranded Michael Verrips, who then produced several fine saves as Dick Advocaat’s side pressed. Michael de Leeuw equalised with a penalty 11 minutes from time after Caner Cavlan was brought down.

RKC Waalwijk eased their relegation worries with a 3-1 win over Groningen. The Brabant side profited from two defensive blunders in the opening 15 minutes, both finished off by AZ loanee Thijs Oosting, before Sylla Sow added a late third.

Utrecht remain in contention for a European spot after Adrian Dalmau came off the bench to grab the only goal in Sittard, while Quinsy Menig twice hit the post for FC Twente as they were held to a goalless draw in Heerenveen.

Heracles looked to have claimed all three points in their mid-table clash with Sparta when Lennart Thy smashed in a close-range shot after 58 minutes, but in injury time Heracles defender Michaël Heylen misjudged a header to his goalkeeper and Rai Vloet volleyed in the loose ball.