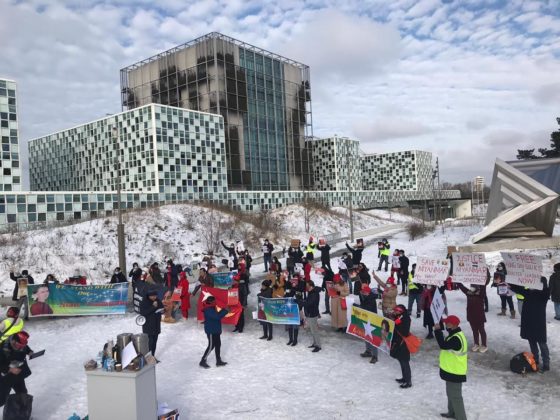 Demonstrators against the Myanmar coup in The Hague

Dozens of people from Myanmar and other supporters gathered in front of the International Criminal Court in The Hague on Tuesday afternoon, to protest about the military coup.

This is the third protest in the Netherlands demanding the release of Aung San Suu Kyi and other politicians who were arrested by the military on February 1, when the military took over the country, a campaigner told DutchNews.nl.

The Myanmar community in the Netherlands numbers some 1,500 people including children born here, according to national statistics agency CBS.

In Myanmar, the protests are intensifying, and the military government has imposed restrictions on public gatherings and instituted a curfew in the major cities.

Aung San Suu Kyi, the country’s civilian leader and founder of the ruling National League for Democracy (NLD), remains under house arrest, as well as a dozen of other NLD politicians. The NLD won the November elections with 83% of the vote.

Dutch foreign trade minister Sigrid Kaag has said the Netherlands supports EU sanctions against the military regime but as yet the EU has not acted.

EU foreign policy chief Josep Borrell said on Tuesday the EU could impose fresh sanctions on Myanmar’s military over its seizure of power, but warned any punishment should not hit the ‘hit the most vulnerable part of the population’.