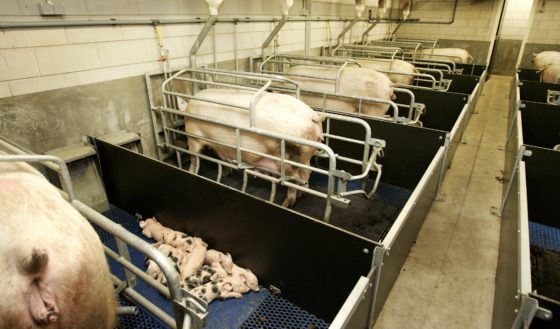 Kraambox (maternity box) has been declared euphemism of the year by animal welfare organisation Wakker Dier.

The word kraambox conjures up images of new born babies and fluffy toys but in reality refers to the practice of severely constricting sows’ movements until their young are weaned, the organisation said.

‘It sounds very cosy and cuddly but in reality a kraambox is a steel cage with a hard floor in which the sow is kept for an average of four weeks after giving birth without being able to move except to stand and lie down,’ spokeswoman Anne Hilhorst said.

The reason for the box is to stop the mother from lying down and crushing the piglets, Hilhorst said, but the isolation is stressful for pigs which are social animals. The steel bars that bear down on their backs also hurt them physically and many also suffer from bladder infections.

Some one million sows in the Netherlands spend around one fifth of their lives in the box, Wakker Dier said. Last year a petition presented to the European Commission demanding a ban on cages in livestock farming, including those for nursing sows, was signed by over a million people.

Kraambox scored 45% of the vote and was followed by oogsten (to harvest) which is used to refer to killing and skinning mink. Ruimen (literally to empy or clean) came third for its other definition, which is to kill off large numbers of animals to prevent disease from spreading.

‘The use of nice sounding words, such as kraambox, hides what is really happening to the animals,’ Hilhorst said. ‘Words colour perception. You could almost forget we are talking about living creatures.’