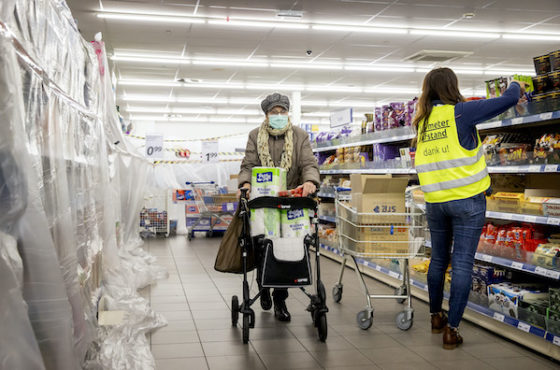 Stocking the shelves with sweets at a branch of discount store Action. Photo: Koen van Weel

The cabinet has tightened up the rules governing which shops can remain open after a number of high street chains, including Action and Hema, said they would open to sell food, toiletries and pet supplies.

Only shops which primarily sell essential items can open, and that means stores which earn 70% of their total turnover from such goods, economic affairs minister Eric Wiebes confirmed on Wednesday afternoon.

The earlier version of the rules said shops could open specific departments selling essential items if they accounted for at least 30% of turnover. That provision has now been scrapped.

However, department stores with a food section will be able to open that part of their operation if they are separate and have their own entrance.

In the case of retail chains, turnover will be assessed on a branch by branch basis. Over-the-counter medication and toiletries are considered essential but cosmetics and perfume are not.

Shops which qualify as essential retail outlets will be able to sell a limited amount of non-essential items but are not allowed to expand their collections.

Hema, which had said it would remain open, has now said that all its stores will shut from Thursday. Action, which said on Wednesday morning it would open as normal, will also now have to close.

Justice minister Ferd Grapperhaus said that enforcement will be strict if shopkeepers attempt to get round the rules.

MPs had reacted furiously to the news that some stores planned to open as usual, saying big chains were benefiting at the expense of small, specialist stores.

‘This is not the right moment to push the boundaries,’ health minister Hugo de Jonge said earlier on Wednesday. The current situation required ‘maximum effort’ to limit points of contact between people, he said.