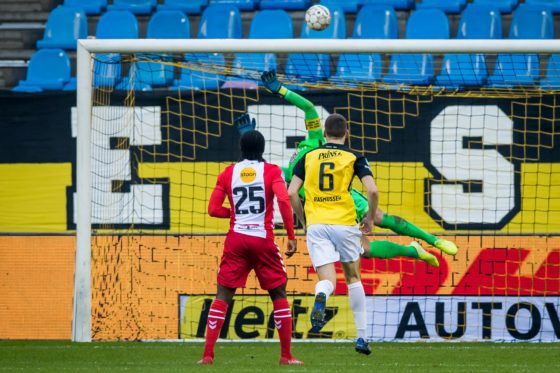 Ajax and Vitesse remain level on points at the summit of the Eredivisie as all five of the top teams won at the weekend.

Ajax’s visit to Utrecht ended in a comfortable 3-0 win, but it took until midway through the second half for the Amsterdammers to break the deadlock when an unmarked Davy Klaassen fired in his fourth goal of the season.

In a lacklustre game, Dusan Tadic put away a penalty awarded for a challenge on Lassina Traoré before Quincy Promes secured the points when he latched on to Klaassen’s deep cross in injury time.

Manager Erik ten Hag was full of praise for Klaassen’s all-round game in the week the midfielder returned to the Dutch international squad after a three-year absence. ‘He’s a goalscorer, as we’ve seen in the last few games. But what he did for the last goal as well was footballing ability and class.’

Vitesse overcame struggling Emmen 3-1 with two goals in the first half by Oussame Tannane, a penalty and a low strike from outside the penalty area. Despite the sending-off of Riechedly Bazoer just before the half-hour mark for a heavy tackle on Sergio Peña, Vitesse took a three-goal advantage into the break through Loïs Openda.

Emmen pulled one back in the second half through Michael de Leeuw, but some fine goalkeeping by Remko Pasveer on his 37th birthday kept the Drenthe side at bay.

PSV Eindhoven are two points behind the leaders after winning the Brabant derby against Willem II 3-0. German internationals Philipp Max and Mario Götze put Roger Schmidt’s side ahead in the first half before Donyell Malen notched his fifth of the season late on.

Feyenoord followed up their Europa League win in midweek with a battling win over Groningen in De Kuip. Lutsharel Geertruida headed in from a corner five minutes after half-time before Steven Berghuis converted a penalty six minutes from time.

The other unbeaten side, AZ Alkmaar, moved up to eighth place with a convincing display against Heerenveen. Captain Teun Koopmeiners scored his first penalty in three attempts after 28 minutes before Lucas Woudenberg put the ball into his own net under pressure from the incoming Albert Gudmundsson. Jesper Karlsson rounded off a fine move two minutes after the break for the third.

Twente Enschede looked to have thrown away a 2-0 lead in The Hague as the home side crowned a late comeback with an 85th-minute equaliser by Samy Bourard, but Danilo restored the lead within a minute by poking home from a corner before Thijs van Leeuwen made sure with a low shot into the corner.

Sparta managed their first win of the season at RKC Waalwijk with second-half goals by Lennart Thy and Abdou Harroui, but Fortuna Sittard are still searching after a Thomas Lam free-kick in the second half earned PEC Zwolle a point in Limburg.

VVV exorcised the memory of their 13-0 defeat by Ajax by claiming their first home win of the season against Heracles. A late goal by Georgios Giakoumakis snatched the points after the Greek international had given away the penalty that allowed Rai Vloet to equalise in the 78th minute.