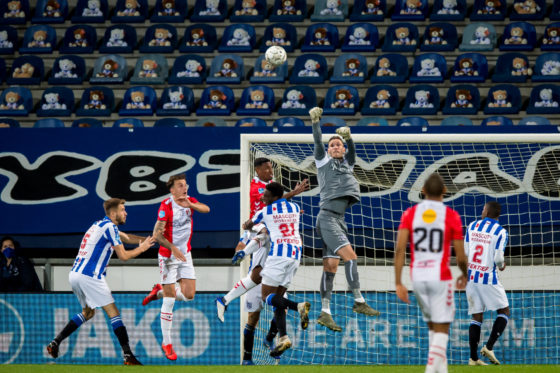 Ajax’s historic 13-0 thumping of VVV Venlo put them on top of the Eredivisie on goal difference after a Covid-hit PSV went down 2-1 in Arnhem.

Vitesse secured their first home win over PSV since 1997 with a header by Jacob Rasmussen in the first half and a tap-in by Loïs Openda on 54 minutes, just four minutes after Olivier Bosgcali had equalised for the visitors.

PSV, who were missing six players including captain Denzel Dumfries, thought they had rescued a point in injury time when Bas Nijhuis awarded a penalty against Eliazer Dasa for pushing. But the referee changed his mind after an intervention from the VAR panel.

It meant Vitesse overtook their opponents to go second in the table, leaving PSV coach Roger Schmidt aggrieved. ‘The rules are 1000% clear that the referee’s decision can only be challenged if his decision was clearly wrong,’ he said. ‘There was no reason for him to consult the monitor when he was standing five metres from the incident.’

Ajax have a handsome advantage on goal difference after becoming the first team to score 13 goals in an Eredivisie match. They beat their own record set in 1972 in their old De Meer stadium, when Johan Cruyff scored four times in a 12-1 hammering of Vitesse.

Lassina Traoré, who bagged five goals, and Brazilian winger Antony, who set up the first two goals for Jurgen Ekkelenkamp and Traoré, were VVV’s main tormentors. The home side’s hopes of keeping the score respectable evaporated when Chris Kum was dismissed after 51 minutes for a lunging challenge on Antony.

Ajax were 4-0 up at that point and doubled their lead in the following eight minutes, with Daley Blind’s low drive the pick of the strikes. Substitute Klaas-Jan Huntelaar made it double figures from the penalty spot and Traoré rounded off the scoring in the 87th minute.

Heerenveen continued their good start to the season with a 4-0 win against Emmen, who had two players sent off as they fell apart in the second half. Henk Veerman scored two of the home side’s goals in a match attended by 15,000 teddy bears, which were placed on the empty seats of the Abe Lenstra Stadium by children’s cancer charity Kika.

Feyenoord maintained their unbeaten record thanks to a late equaliser by Ridgeciano Haps against RKC Waalwijk, four minutes after Ola John’s close-range strike looked to have snatched all three points for the Brabant side.

Groningen moved into the top half of the table as Jørgen Strand Larsen’s first two goals for the club helped them to a 3-1 win at Fortuna Sittard. The visitors were without the injured Arjen Robben, but Strand Larsen’s brace in the first half and a free-kick by Bart van Hintum secured all three points.

The fastest goal of the weekend was scored by Twente’s Danilo, who clipped in Václav Cerny’s pass after just 17 seconds to put his side ahead in Utrecht. But the home side prevailed thanks to Bart Ramselaar’s shot off the crossbar just before half-time and a goal by Sander van der Streek early in the second period.

Willem II thought they had scored a last-minute winner in Zwolle when Jan-Arie van der Heijden smashed in a shot from the edge of the area, but the VAR panel decided Sebastian Holmén, who was standing in an offside position, was interfering with play. The game ended goalless.

Sparta are still looking for their first win of the season after they were held to a 1-1 draw by Heracles. Abdou Harroui put Sparta ahead when his long-range shot was deflected in by Lennart Thy just after half-time, but shortly afterwards team-mate Adil Auassar was dismissed for kicking out at Rai Vloet.

Vloet’s pull on the shirt of Auassar in the same incident went unpunished and the midfielder bagged the equaliser on 75 minutes when he tucked away Kasper Lunding’s cross.

For the fourth time in five games AZ Alkmaar contrived to snatch a draw from the jaws of victory as ADO Den Haag equalised three minutes from time through Michiel Kramer. Arne Slot’s side, which had 15 players missing as a result of positive coronavirus tests, had twice taken the lead with goals from Albert Gudmunsson in the first half and Jesper Karlsson in the second.