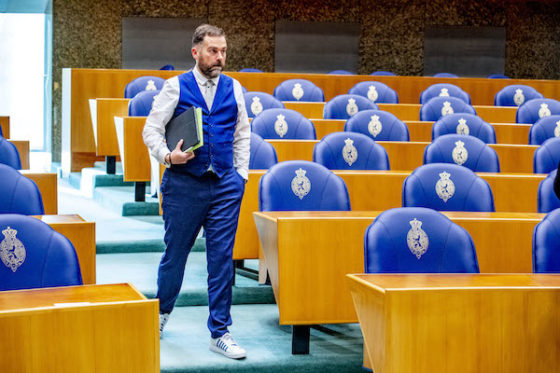 Klaas Dijkhoff, current leader of the right-wing Liberal party VVD in parliament and considered by many to be Mark Rutte’s heir apparent, is quitting politics at the March general election.

Dijkhoff, 39, told the NRC in an interview he had decided to leave two years ago. Politics, he said, is ‘demanding and addictive’ but it is also ‘lots of talking and meetings’.

‘There is little room for depth,’ he told the paper. ‘We are often chasing after the facts and society has often moved ahead of the political discussion.’

Dijkhoff was elected to parliament in 2010 and replaced Fred Teeven as junior justice minister in 2015 when he resigned over a scandal involving payments to drugs lords.

At the 2017 election, Dijkhoff returned to parliament as leader of the biggest party and established himself as a colourful and often controversial MP.

In 2018 he hit the headlines when he declared people from problem neighbourhoods who commit crimes should face double the penalties of people living elsewhere.

He also repeatedly spoken out in support of nuclear power and called for a ban on demonstrations during the Sinterklaas processions.

In April 2019, Dijkhoff set out his vision for the VVD’s future with a ‘discussion document’ entitled ‘Liberalism that works for people’.

The party, Dijkhoff said, has listened too much to big companies. The man in the street should not only be protected against the government, but that the government should have a role when big firms threaten individual freedoms, he said.

Dijkhoff’s departure leaves a political vacuum within the VVD, with no clear candidate to take over when Mark Rutte decides to call it a day.

However, his decision to go now means that Rutte will be the person to take the VVD  into the general election campaign and, given the polls, a fifth period in office.

Dijkhoff told the NRC it was not his intention to become part of any new Rutte-led cabinet, but that he was not ruling the matter out entirely.