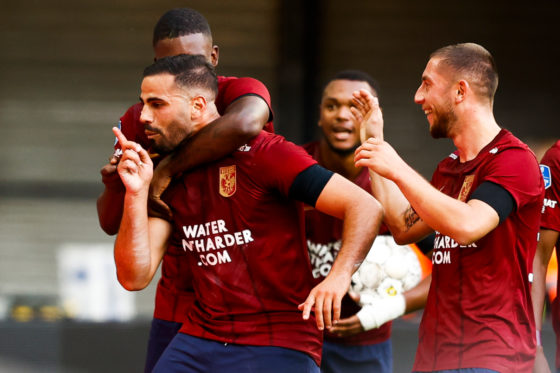 Ajax joined Heerenveen, Vitesse Arnhem and PSV Eindhoven at the top of the Eredivisie with a comfortable 3-0 win over RKC Waalwijk.

In an insipid game, Dusan Tadic and Zakaria Labyad gave the Amsterdammers a two-goal cushion at half-time before defender Lisandro Martinez headed in a Tadic cross on 78 minutes. RKC’s Luuk Wouters was sent off after an hour for hauling down Labyad.

Vitesse had to take on Sparta without the guidance of head coach Thomas Letsch, who was in quarantine along with seven members of the coaching staff after testing positive for coronavirus. Oussama Tannane put the Arnhem side ahead with a viciously swerving free-kick in the first half, with Armando Broja adding a second late on.

PSV looked to have thrown away a home win against Emmen when goalkeeper Yvon Mvogo committed a howler in the 83rd minute, misjudging a back-pass by Philipp Max that trundled under his foot into the net. But Maxi Romero headed home deep into injury time to snatch a 2-1 win.

Head coach Roger Schmidt defended the 26-year-old Swiss goalkeeper, who is on loan from German side RB Leipzig. ‘Of course this wasn’t good, but I remain convinced he will prove to be a very good keeper,’ said Schmidt.

Heerenveen put Fortuna Sittard to the sword in the first half as Olivier Batista Meier, Joey Veerman with a penalty and Henk Veerman secured a 3-0 lead at half-time. Fortuna’s only reply in the second half was a header by Sebastian Polter.

AZ Alkmaar followed up their disappointing Champions League exit with a 1-1 draw in their opening Eredivisie match against PEC Zwolle. The loss of star winger Calvin Stengs after 17 minutes, sent off for a lunging tackle, was a major setback for Arie Slot’s side, but they salvaged a point with a second-half equaliser from Myron Boadu.

Feyenoord also had to settle for a point after going 1-0 behind at home to FC Twente after just two minutes. Steven Berghuis equalised with a 29th-minute penalty but then missed two golden chances to win the game in injury time.

Willem II were the biggest winners of the weekend, scoring four times without reply in the second half against Heracles. Greek striker Vangelis Pavlidis bagged two of the goals, with Germans Görkem Saglam and John Yeboah also finding the net.

An own goal by Shaquille Pinas condemned troubled ADO to a 1-0 home defeat to Groningen, while VVV followed up their 5-3 win at Emmen with a 1-1 draw at home to Utrecht.