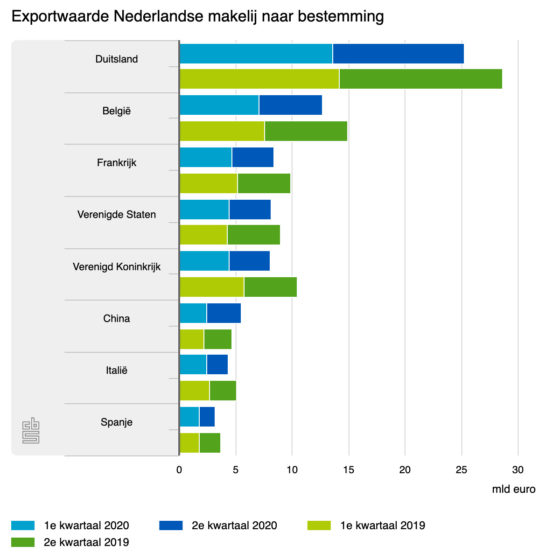 The Netherlands’ export of goods and services fell by 9% in the first six months of this year, national statistics office CBS said on Monday.

While there was little change in the first three months at the start of the coronavirus pandemic, in the second quarter exports were down 17%, the CBS said.

The biggest drop was in exports to Britain, which fell 23%, with oil and gas exports declining 30%. Britain, once the Netherlands’ third most important trading partner, is now in fifth place.

Exports to Germany, the Netherlands’ most important trading partner, were down 12% but Dutch companies exported 18% more to China.

Meanwhile, Rotterdam port, trade lobby group Evofenedex and the Dutch transport company association TLN have launched the next stage of their ‘get ready for Brexit’ campaign, as talks between the EU and Britain on a new trade deal look increasingly unlikely to book results.

The Dutch government too will relaunch its campaign in October, website Nu.nl said on Monday.

Research on behalf of the foreign and economic affairs ministries published in July shows Dutch companies which do business in Britain are less well prepared to deal with the impact of Brexit than they were a year ago.