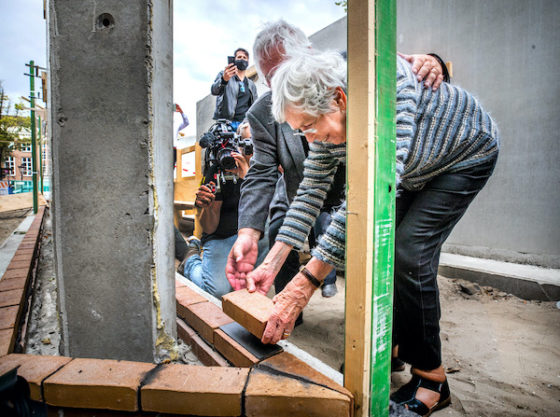 The first brick of a monument which will bear the names of 102,000 Jewish, Sinti and Roma victims of the Nazis has been laid by a childhood friend of Anne Frank at the Weesperplantsoen in Amsterdam.

The first name to grace the monument is that of Dina Frankenhuis, who worked in an office and lived with her parents in Amsterdam-Oost. She was killed in Sobibor concentration camp aged 20.

The finished monument will be a 250 metre long labyrinth of corridors made up of bricks, each with the name of a holocaust victim.

Apart from their names, the victims’ date of birth and age will also be lasered into the stones.

Plans for the memorial of names, designed by Polish-American architect and child of holocaust survivers Daniel Libeskind, have been 14 years in the making.

The project was initiated in 2006 by Jaques Grishaver, who said the monument will be all about remembering people whose names have been forgotten. ‘We will have the names of 102,000 people who died, have no grave and whose names are never spoken. We will have retrieved those names,’ Grishaver told broadcaster Nos.

The site of the monument is contentious and an earlier site proposed at the nearby Wertheimpark was abandoned after protests. Locals said they were afraid of crowds and that there was not enough space for the monument, but lost their case in court.

The project also hit a number of financial snags and is now estimated to cost €15m, almost double the initial estimate.

The government upped its contribution from €2.3m to €8.3m and Amsterdam’s local council, businesses and private citizens are making up the rest of the money.

Among them is Anne Frank’s childhood friend 91-year-old Jaqueline Maarsen, who donated €50,000, part of the proceeds from the auction of a poem written by Anne Frank in 1942 for Maarsen’s sister’s poetry album.

‘I’m very pleased the monument is finally happening. It’s a lovely design, with all the names,’ she told Nos after the ceremony.

The monument is expected to be completed in about a year’s time.