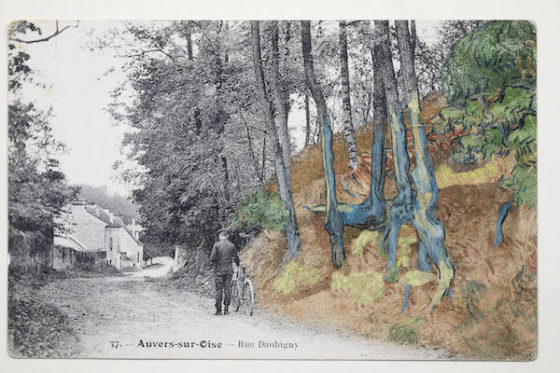 The postcard colourised with an overlay of Tree Roots by Van Gogh, ©arthénon via Van Gogh Museum

The location where Vincent van Gogh painted his last work has been pinpointed, 130 years after the artist’s death.

Boomwortels (tree roots), an oil painting of trunks and roots rendered in bright colours, was composed in Auvers-sur-Oise on July 27, 1890, two days before the painter took his own life.

A letter by Andries Bonger, the brother-in-law of Vincent’s brother Theo, describes it as ‘a sous-bois [forest scene], full of sun and life.’

Wouter van Veen, artistic director of the Van Gogh institute, tracked down the location after he recognised the shape of the trees in a vintage postcard on his computer that dates from around 1910.

The exact spot, a coppice beside a road on the way in to Auvers-sur-Oise, was used to chop wood, but is still recognisable 130 years later, Louis van Tilborgh, senior researcher at the Van Gogh Museum, told Nieuwsuur. 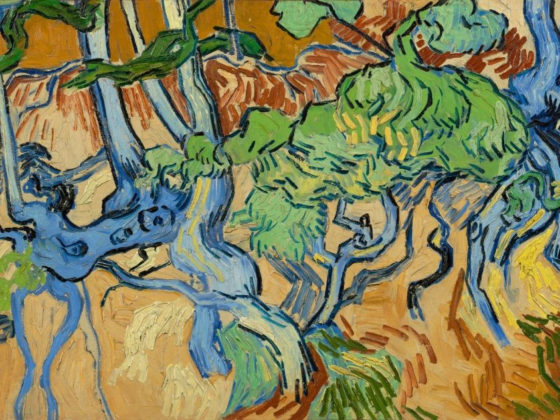 ‘The depiction of wood used for chopping must have symbolised life and death for Van Gogh,’ said Van Tilborgh. ‘As if he wanted to say: I have lived and I have struggled with oppressive forces.’

Woodland historian Bert Maes also studied the location and said it appeared to correspond with the roots depicted in the painting.

‘The location looks very plausible to us,’ said Maes. ‘Although the scene on the postcard is around 20 years later, you can see very clearly in Tree Roots the same configuration of coppice wood on a steep chalk verge.

‘Coppice is a type of woodland construction in which new growth is continuously chopped down to be used. The nice thing is that there is even a stump left that is still recognisable after 130 years.’

During his research Van der Veen also uncovered a radio interview with Adeline Ravoux, whose father ran the Ravoux hostel where Van Gogh spent his last 70 days. In the interview she recalls how as a 13-year-old girl she modelled for the artist and brought him his meals.

‘It’s moving to hear the voice of a real witness,’ said Van der Veen. ‘You can’t come closer to the artist than that.’