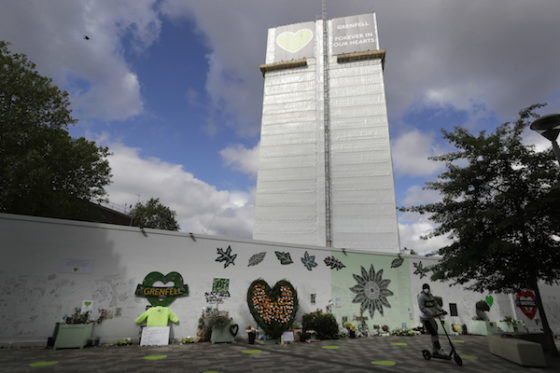 Tributes are placed near Grenfell Tower on the third anniversary of the fire. Photo: AP Photo/Kirsty Wigglesworth)

Cutbacks on building inspections is one reason why half of local councils have failed to check their buildings for the flammable cladding that killed 71 people in the fire at Grenfell Tower in London, the Volkskrant reported on Wednesday.

The type of insulation used on the outside of the building has been found to be the main reason why the fire in June 2017 was able to spread so quickly.

Dutch local authorities were told by home affairs minister Kajsa Ollongren to make an inventory of the high-rise blocks with the same type of cladding in their towns in November 2018, some 18 months after the London fire.

The cladding system had been used widely, particularly in older buildings as a cheap way of insulation in the Netherlands as well, the paper said.

A survey by the paper showed that of the 48 biggest local councils, 28 have finished the inventory of potentially dangerous buildings and 18 are working on it. Alkmaar and Lelystad have not begun the process at all, the paper found. So far 144 buildings which may be at risk  have been identified. The deadline for the inventory was January 2020.

The checks are being carried out according to a two-step protocol in which a building is identified, following which the owner is told to take action to make the building safe. The council does not check whether that has been done because, local authorities say, fire safety is the responsibility of the owners.

National building inspection head Wico Ankersmit said the results of the survey were ‘disappointing’ but said the inspection of buildings is a complex matter and not confined to checking the cladding.

He also cited the fact that building inspection in the Netherlands has been ‘hollowed out’ because of cutbacks.

‘We used to have a government inspection service which would chase up local authorities. But inspection has now been decentralised and, to a large extent, privatised. What is needed is a regular check-up of buildings not a policy based on incidents like a collapsed balcony,’ he told the paper.

The privatisation of building inspection is a contributing factor in the use of the cladding, risk assessment expert Ira Helsloot said. ‘Building companies were given a big say in the fire safety of the materials used. ‘It is not in their interest to have thorough testing and stringent demands. Risks may be underestimated. On the other hand inspection bureaus tend to overestimate the risks.’

Civil engineering expert Jos Lichtenberg said if the government is serious about preventing fires it would have ordered an independent inquiry. ‘The butcher is checking his own meat. The way it is done now gives the impression that politicians don’t want to get to the bottom of this.(..) It will take a big fire for the Netherlands to wake up.’