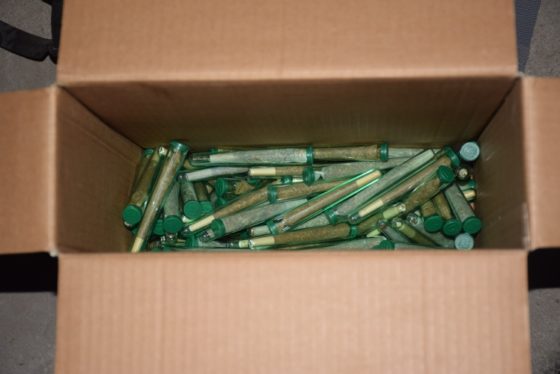 Some of the pre-rolled mariuana joints. Photo: Hungarian police

Two young Dutch men have been each sentenced to five years in jail after admitting taking drugs into the country to sell at a music festival, broadcaster NOS reported.

The duo had agreed with the public prosecution department to accept sentences of eight and 10 years, but the judge opted for a lesser sentence. If the two had not agreed to accept a deal and were found guilty, they could have been sentenced to life in jail under Hungary’s strict drugs laws.

School friends Roelf B and Gert-Jan N were arrested in April 2019 at the start of the Sziget music festival after thousands of pills and 450 joints were found in their tent.

More ecstasy pills and 15 kilos of pre-rolled marijuna joints were later found in their car.

B, 22, is a promising sprinter who represented the Netherlands at the European under-23 championshops in Sweden in 2019. One of the bags used to carry the drugs shown on a Hungarian police video includes the logo of TeamNL.

The video also shows price lists found by the police, which include €15 for an ecstasy pill or a pre-rolled marijuana joint.

The duo were offering a discount of €40 if people bought 10 or more and were using N’s Dutch phone number to contact clients. This is why the 23-year-old is serving a longer sentence, NOS said.

This article was updated on Monday afternoon to reflect the actual sentence.