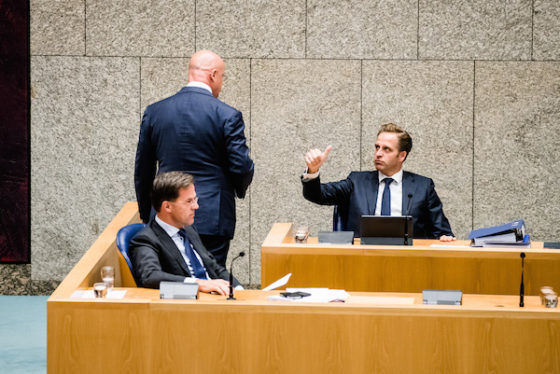 There was an online row between Amsterdam mayor Femke Halsema and justice minister Ferd Grapperhaus about Monday’s anti-racism demonstration in Amsterdam, where social distancing rules were broken on a major scale, Whatsapp messages show.

Halsema has accused Grapperhaus of ‘leaving her in the cold’ after appearing to deny he had supported her decision not to break up the demonstration, even though more than 5,000 people had packed onto the Dam in the centre of the capital.

An exchange of Whatsapp messages between the two on the night in question has now been released following demands from MPs.

They show that Halsema alerted Grapperhaus to the fact the square was becoming overcrowded at 17.02.

‘We are carrying out crowd controls at the entrance to the Dam but are not going to break up the demonstration,’ she wrote. ‘There is too much emotion and we want it to pass off amicably, without placing the police in front of demonstrators (unless things get out of hand).

The mayor signed off: ‘People are responsible for themselves. So you know. Femke.’

Grapperhaus first tried to phone Halsema and then answered by Whatsapp: ‘Hi Femke. Completely agree. After it is over, evaluation when it comes to these sorts of organisers. Greets, Ferd.’

A couple of hours later, Halsema used Whatsapp again to tell the minister the Telegraaf was on the story. ‘I want to go public about this being a decision between the triangle (police, public prosecutor and mayor) taken with your support.’

Grapperhaus then replies to say ‘no support had been given for the decision-taking’.

‘That is completely up to you as the triangle,’ he said. ‘As I said earlier, I understand your decision not enforce the 1.5 metre rule given possible escalation. I remain concerned about possible problems or plundering.’

The online conversation then took a distinctly chilly turn, with Grapperhaus restating the evening’s conversations between the two so far, and Halsema dismissing his Whatsapp as ‘being established for the freedom of information request’.

‘You could have explained how complicated the situation is, rather than just leaving me in the cold,’ she said.

Grapperhaus told parliament on Thursday that he did not feel that Halsema had involved him in the row. ‘Mayors often phone me to let me know things,’ he said. But this could not be seen as ‘support’, he said, adding that the mayor remains responsible.

He also repeated his assertion that it was right not to clear the Dam, in order to head off the threat of problems between police and demonstrators.

Halsema is facing questions in the city council about what happened on Monday and far right parties have called on her to resign or be sacked. Councillors will debate the issue next Wedesday.