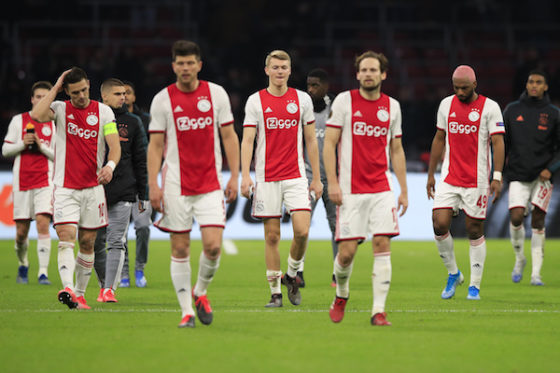 Ajax players react to the team’s elimination after a round of 32. Photo: AP Photo/Peter Dejong via HH

Despite a 2-1 home win over Spanish side Getafe, Amsterdam football club Ajax is out of this season’s European competition.

Nevertheless, coach Erik ten Hag said he felt his team had displayed the ‘right mentality’ against the Spanish side.

The home team, without injured star player Zakim Hiyech, had a lot to do after losing 2-0 away in the first leg in the Europa League round of 32, and the team spirit had been further hit by last weekend’s Eredivisie loss to Heracles.

‘Ajax did win the game thanks to an own goal from Olivera, but it speaks volumes that both sides had the same attempts on goal – nine – despite the favourites for the tie needing to score four from the fifth minute,’ the Uefa.com commentator said.

Earlier in the evening AZ of Alkmaar lost 2-0 away to Lask Linz of Austria, ending their European campaign in the round of 32.

Ajax are just three points ahead of AZ in the Dutch league competition and the two sides meet this weekend.