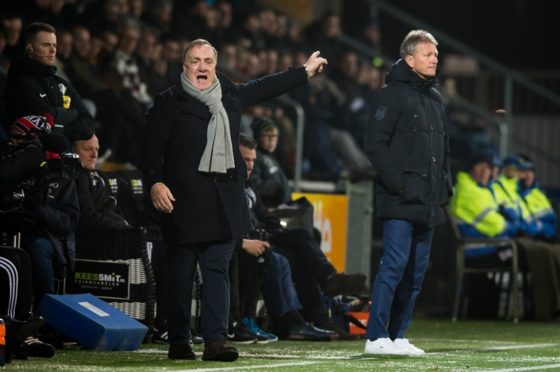 Ajax suffered their third defeat of the season to open up the Eredivisie title race again as they ran aground on Groningen’s stubborn defence.

AZ closed the gap to three points with their first win since Christmas at Heerenveen, while Feyenoord rose to third with a fourth successive victory as Dick Advocaat’s revival continued.

At the bottom of the table, RKC Waalwijk have a mountain to climb after losing their second successive relegation six-pointer as they surrendered an early lead against VVV.

Deprived of their injured playmaker Hakim Ziyech, the champions looked blunt in attack and went behind in the first half when Kaj SIerhuis, on loan from Ajax, capitalised on some slack defending. Ramon Lundqvist doubled the lead early in the second half via Lisandro Martinez’s foot, before Donny van de Beek replied with a smart half-volley on 72 minutes.

Van de Beek was scathing afterwards about his team’s ‘weak and sloppy’ performance. ‘Too many things went wrong and that needs to change fast,’ he said. ‘Of course we’re missing a lot of players, but this was about sharpness.’

AZ stopped the rot after successive defeats at the hands of Willem II and Sparta, with Myron Boadu scoring the decisive goal in Friesland on 72 minutes. AZ can go level on points with Ajax if they beat bottom-placed RKC in next Friday’s game.

RKC missed the chance to close the gap at the bottom despite going ahead against VVV Venlo when Emil Hansson struck on 15 minutes. They held the lead until 14 minutes from time when first Johnatan Opoku and then Oussama Darfalou scored to lift VVV out of the relegation places and leave their opponents five points adrift.

Feyenoord also found themselves 1-0 behind at the interval in Almelo, but turned the game round with three goals in 15 minutes from Jens Toornstra, Luis Sinisterra and Brazilian defender Eric Botteghin. Defender Maximilian Rossmann opened and concluded the scoring for Heracles.

The Rotterdammers benefited from dropped points by both Willem II and PSV Eindhoven to break into the top three for the first time this season. PSV looked set for victory against FC Twente when Joël Drommel spilled Ibrahim Afellay’s shot into the path of Denzel Dumfries just after the hour mark. But Afellay’s second yellow card galvanised the visitors and Haris Vuckic fired in from close range three minutes from time.

Willem II were unable to break down PEC Zwolle despite playing the last 11 minutes with an extra man after PEC’s Thomas Lam was sent off for pulling back Che Nunnely. The point was not enough to stop PEC slipping into the relegation play-off places.

Elsewhere in the bottom half, Emmen claimed a point at Vitesse as Michael Leeuw nodded in an equaliser in the second half after Bryan Linssen had put the hosts ahead with an exquisite 19th-minute lob. Sparta denied Fortuna Sittard a first away win of the season when Jurgen Mattheij headed in on 73 minutes.

The size of the task facing ADO’s new manager Alan Pardew was laid bare as Utrecht swept aside the team from The Hague in a 4-0 win, with returning Swedish international Kristoffer Peterson playing a starring role and Sean Klaiber scoring twice for Utrecht.