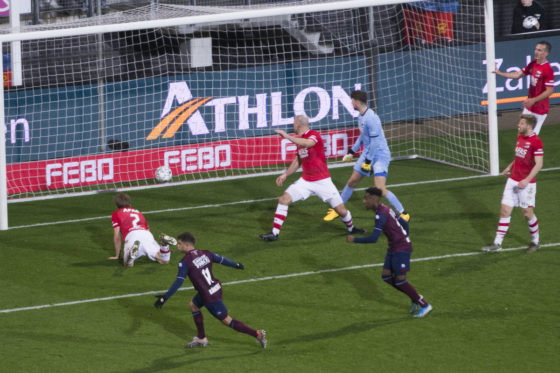 AZ Alkmaar’s second defeat in a row allowed Ajax to open up a six-point lead as the Eredivisie returned from its winter break.

AZ went down at home to Willem II, who rose to third place at the expense of their neighbours PSV as the latter could only manage a 1-1 draw in Venlo.

The champions struggled to convince against Sparta and suffered a setback when Hakim Ziyech limped off after an hour with an apparent calf strain. Ajax won 2-1 thanks to goals from Donny van de Beek and Ryan Gravenberch, before Joël Piroe pulled one back on 74 minutes.

The match also featured a third debut in Ajax colours for Ryan Babel after the 33-year-old arrived on loan from Galatasaray during the winter break. ‘It’s always more enjoyable to play in an in-form team,’ said Babel. ‘Now the waiting is over and we can get on with it.’

Willem II added AZ to their list of Eredivisie scalps, which also includes Ajax and PSV, as they came back from 1-0 behind in the AFAS Stadium. Oussama Idrissi put the home side ahead midway through the first half, but the Tilburgers pounced on some slack defending to equalise through Mats Köhlert after 65 minutes.

Vangelis Pavlidis then started and finished a breakaway move before Mike Trésor Ndayishimiye sealed the win with a fizzing long-range shot.

Troubled PSV needed a last-minute header by Denzel Dumfries to rescue a point at VVV Venlo, who thereby missed the chance to climb out of the bottom three. Johnatan Opoku put the Limburg side ahead with a 68th-minute penalty after Simon Janssen was brought down in the box.

ADO Den Haag edged ahead of VVV as they overcame RKC Waalwijk 2-0 in Alan Pardew’s first match as manager. Both goals came from set pieces: a header by centre-back Shaquille Pilas and a direct free-kick by substitute Aaron Meijers. The result leaves RKC five points adrift at the foot of the table.

Emmen were the only other team outside the top six to win, Marco Kolar bagging the only goal against Heracles on the stroke of half-time. Cyriel Dessers looked to have saved a point for the visitors in injury time but he was ruled to be marginally offside.

Feyenoord continued their rehabilitation under Dick Advocaat with a convincing 3-1 win over Heerenveen in a match that saw a return to form for striker Nicolai Jørgensen. The Dane scored twice in the opening 30 minutes, adding to Luis Sinisterra’s opener, and despite a swift reply by Joey Veerman Feyenoord never looked in trouble.

Vitesse Arnhem beat Fortuna by the same scoreline in Limburg as Edward Sturings began his fifth spell as manager. Tim Matavz scored a goal in each half after Oussama Tannane had put Vitesse ahead with a 26th-minute free-kick.

Utrecht looked to have kicked off the second half of the season with a sensational comeback against PEC Zwolle. The visitors turned a 2-0 deficit into a 3-2 lead with Issah Abbas’s 86th-minute toe-poke, but Yuta Nakayama rescued a point with a low shot three minutes later to keep PEC just clear of the relegation zone.

Groningen had to settle for a point in Enschede as Ajdin Hrustic paid the price of missing a penalty on 60 minutes in a match that finished goalless.