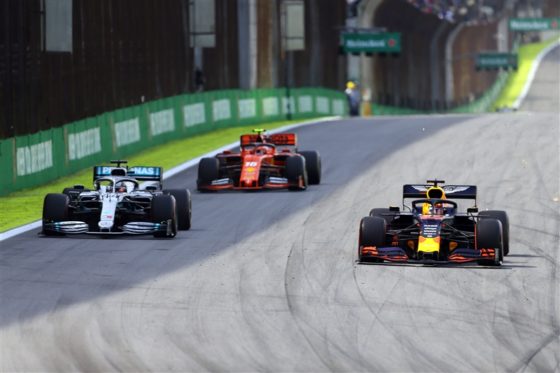 Max Verstappen claimed his third win of the Formula 1 season and the eighth of his career with a commanding drive at the Brazilian Grand Prix.

Starting from pole position for only the second time in his career, Verstappen roared into the lead and stayed there for most of the race, twice overtaking world champion-elect Lewis Hamilton after pit stops.

Second place went to Pierre Gasly after Hamilton was penalised five seconds and demoted to seventh for taking out Verstappen’s team-mate Alexander Albon in the latter stages.

The win lifted Verstappen to third place in the drivers’ rankings and the 22-year-old said his ambition was to conclude the season in the top three.

‘It all went perfectly today,’ he said. ‘I’m really happy with it. Especially the third pit stop where we switched to soft tyres worked out very well strategically. That was a great choice by the team.’

Verstappen’s chances of finishing the season in the top three were boosted by a collision between Ferrari duo Charles Leclerc and Sebastian Vettel that took both drivers out of the race.

‘I came here with a 14-point deficit and will start the final race of the season in Abu Dhabi with an 11-point advantage over Leclerc,’ he said. ‘We’re going to try to defend our third place in the standings. This weekend gives us a lot of confidence in any case.’