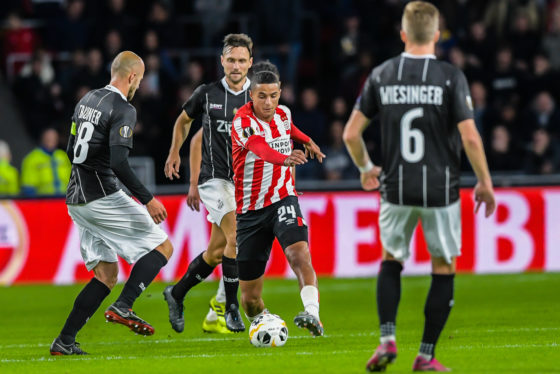 PSV’s teenage star Mohammed Ihattaren has pledged his international future to the Netherlands in a move welcomed by team coach Ronald Koeman.

The 17-year-old midfielder, who was born in Utrecht but is also eligible for Morocco, had delayed the decision on which country to play for to focus on caring for his father, who died last month.

‘I have spent a long time thinking about it and talked it over a lot with my family,’ Ihattaren said in a statement published on the KNVB’s website. ‘Ultimately we decided to opt for the Dutch national team.

‘They have done a lot for me in representative youth teams, I have been through everything with them and that makes it difficult to walk away. I have played in orange since the under-14s and won the European under-17 title. It’s great to keep that going.’

Ihattaren’s decision comes one week after another Dutch-born teenager, Sergiño Dest, chose to turn out for the US national team. Dest was born in Almere and has played two friendlies for the Netherlands, but qualifies for the USA through his father.

Team coach Ronald Koeman welcomed Ihattaren’s commitment to Oranje. ‘Mo is a very young player who has developed tremendously and is playing in PSV’s first team.

‘We want to keep talented players like him in Dutch football and we’re happy that he chose Oranje. His decision is a good sign to other players who face the same choice. This is very important for Dutch football.’

The other prominent youngsters who will have to choose a national team include Feyenoord’s Naoufal Bannis, who can also turn out for Morocco, Myron Boadu (AZ) can opt for Ghana, Naci Ünüvar (Ajax) has Turkish roots and Kik Pierie (Ajax) has US parentage. Xavi Simons (Paris Saint-Germain) can opt for the Netherlands or Spain.

Under FIFA rules, players cannot change their national team once they have appeared in a competitive senior fixture for one country unless there are exceptional circumstances, such as being a citizen of a newly independent state.