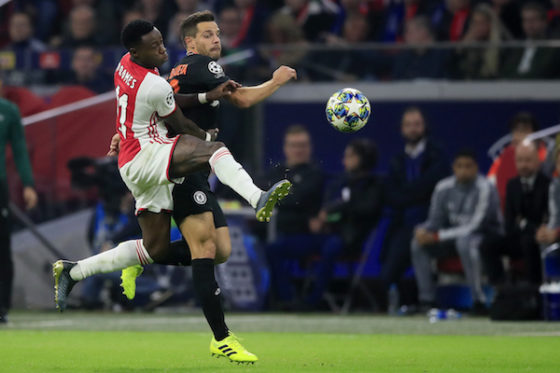 Ajax coach Erik ten Hag has described Wednesday night’s 0-1 defeat by Chelsea in the Champions League as ‘disappointing’ and said the match did not deserve to have a winner.

‘It was an equal game and we were closest to a goal for a long time,’ he told Dutch media. The defeat ends an Ajax run of five wins in the competition and was the first time Ajax failed to score in 18 Champions League home matches.

‘We respected Ajax – that is how we should be,’ Chelsea’s Frank Lampard, said after the game. ‘Five wins in a row can be dangerous, six wins could be even more dangerous.’

A goal by Quincy Promes just before half time was disallowed after the video referee said in a controversial decision that the he had been a couple of centimetres offside.

‘I thought I had made my run at the right time but the VAR is there to make sure in this kind of situation, so we just have to accept the decision,’ Promes told the Uefa website.

The defeat means Chelsea and Ajax share the lead in Group H with six points after three matches. Ajax next meet Chelsea away on November 5.