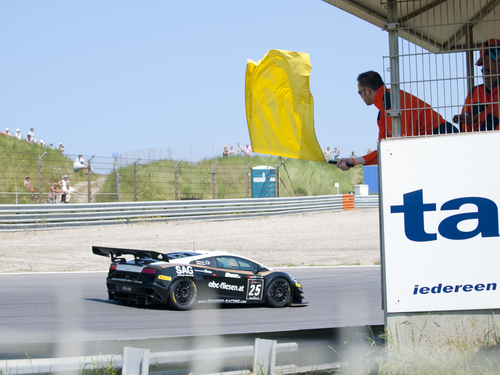 Yellow flag after an accident during a Fia GT race at Zandvoort. Photo: Depositphotos.com

Zandvoort council has warned it may need a further cash injection to ensure next year’s Dutch Grand Prix can go ahead.

The municipality has admitted in its latest budget statement that a number of costs associated with staging the race were not included in its €7 million estimate. They include a contribution towards upgrading the railway station to accommodate the extra passengers and hiring a lobbyist to drum up support for the first Dutch Grand Prix since 1985.

‘That will put a strain on the Formula 1 budget,’ the council noted in its autumn financial report.

The council is putting up €4 million towards the cost of the race, with central government contributing €2.35 million and the province of Noord-Hollland providing the rest. Zandvoort has not specified how much it would need to make up the shortfall.

The environmental cost of the race has also come under scrutiny in the wake of the Council of State’s ruling that the government’s nitrogen emissions regulations do not comply with European law.

The decision means the government will have to draw up stricter planning rules and take direct action such as reducing speed limits to curb nitrogen emissions around designated nature conservation areas.

Sports minister Bruno Bruins insisted that the government was committed to making sure the race goes ahead on May 3 next year. ‘The whole country is looking forward to it and it will be fantastic to hear the “vroom!” on May 3 next year,’ he told WNL op Zondag.

However, leaked memos suggest that not all the coalition parties share the VVD minister’s enthusiasm. Gert-Jan Segers, leader of the Christian Union (CU), said the race was ‘not at the top of my wish list’ in the wake of the nitrogen ruling.

Segers was responding to a report due to be published on Wednesday which will advise the government on how to implement the Council of State’s decision.