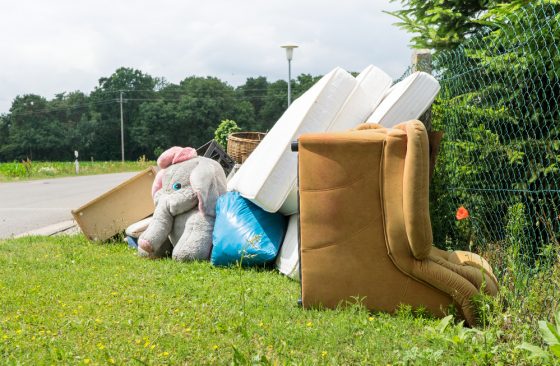 The Hague is going to stop collecting large items of waste left out illegally in the street in an effort to raise awareness, the Volkskrant reports.

The move is part of a larger campaign to promote a cleaner, litter-free city which will start on Friday.

The Hague is spending €7m a year on collecting pieces of furniture and other big, or small, items left around the underground waste containers which is against the rules and, if the culprit can be found, punishable with a fine.

‘I have had it up here with the fridges, beds and mattresses,’ alderman Richard Moss, who is responsible for The Hague’s public spaces, told the paper. ‘In order to get the message through the thick skulls of waste louts we are going to leave the big waste items in the street for a couple of days with a big sticker on it. We want people to become aware of the fact they are polluting their own neighbourhood.’

Moss conceded that often people don’t know that what they are doing is wrong, but said that some can’t be bothered to take the items to a collection point  or arrange for the waste to be collected by the council.

So far more intensive controls by the city have resulted in 65 cases where people were caught in the act and 5,287 cases where the waste dumper could be traced because of an address sticker on packaging.

De Moss rejected claims by locals that the waste containers are not emptied often enough leaving  people no choice but to put their rubbish next to them. ‘That is only the case in 2% of the cases where waste was placed outside the containers. It really is down to bad behaviour by the local people and businesses,’ he said.

Venray is another city which is combating illegal waste dumping at underground containers, the paper said, only it has installed cameras at ‘waste dumping hotspots’. The number of cases of illegal dumping went down by half.