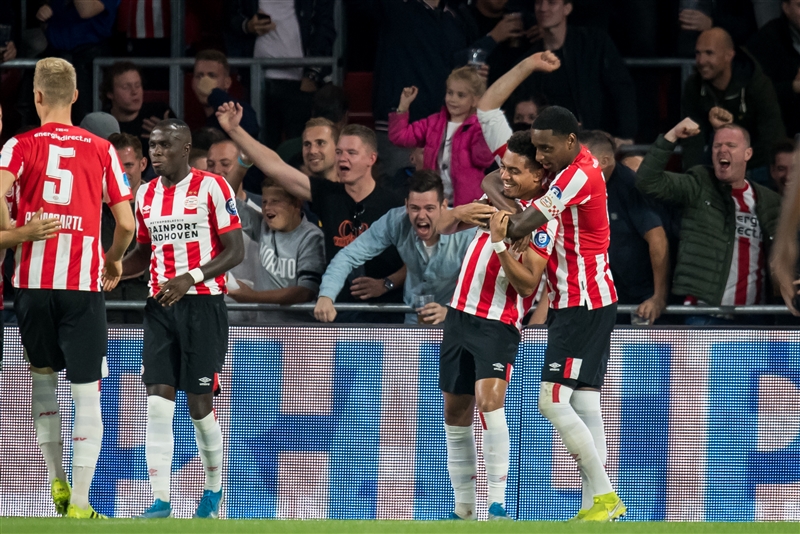 A five-goal haul by Donyell Malen propelled PSV Eindhoven to the top of the Eredivisie for the first time this season, while Ajax also won to set up a top-of-the-table showdown next weekend.

Malen provided the perfect reply to national team coach Ronald Koeman’s criticism that he needed to score more goals as he single-handedly took apart Vitesse Arnhem’s defence in the first half. The 20-year-old added two late penalties to become the first player since Bas Dost in 2011 to net five times in a match.

Vitesse, who started the match as league leaders, had the distinction of being the only team not to score in a weekend when 46 goals flew in during the nine games, the biggest total since 2004.

The top two are a point clear of surprise package Twente Enschede, who held off a late comeback by Fortuna Sittard to win 3-2 in Limburg with goals from Keito Nakamura, Javier Espinosa and Giorgi Aburjania. Twente will go top of the table if they beat Heracles in Friday night’s match, while PSV host Ajax on Sunday afternoon.

The other newly promoted side, RKC Waalwijk, remain bottom of the table and look set for a relegation struggle after they went down 6-2 at PEC Zwolle. RKC were 2-1 ahead after an hour, but substitute Reza Ghoochannejhad turned the game on its head after coming on early in the second half, scoring four times before Gustavo Hamer added the coup de grâce in injury time.

Feyenoord remain unbeaten after they overcame ADO Den Haag 3-2 despite losing strike Steven Berghuis to a knee injury during the week. Jaap Stam’s side looked to be cruising after they went 3-0 up in the first 33 minutes, but gave themselves a late scare with two own goals in the final quarter.

AZ Alkmaar proved too strong for Sparta despite going behind in the second minute after a catastrophic misjudgment by goalkeeper Marco Bizot allowed Abdou Harroui to shoot into an empty net. Oussama Idrissi and Myron Boadu each scored twice, with the outstanding Calvin Stengs providing two assists, before Toop Koopmeiners converted a late penalty.

Willem II, who led the table after four matches, slipped back to eighth after losing their second game in a row to Heracles, for whom Belgian striker Cyriel Dessers scored the opening two goals in a 4-1 win.

Emmen continued to struggle as they went down 3-1 at Utrecht, for whom Adrian Dalmau marked his first start for his new club with the opening goal. Fellow northerners Groningen are also near the bottom of the table following their 2-1 defeat at VVV Venlo in the lowest scoring game of the weekend.