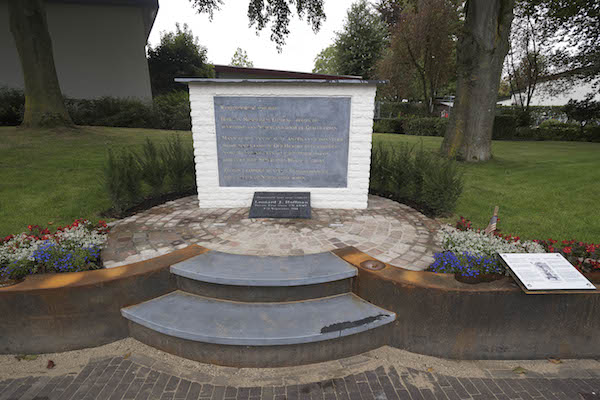 The memorial to the village liberation. Photo: Jan Everhard/Hollandse Hoogte

The  Limburg village of Mesch is on Thursday celebrating 75 years since its liberation from the Nazis by American troops – the first place in the country to be freed after five years of war.

Fourteen veterans are among the people at the celebrations which take place in the village and in nearby Maastricht this week.

The liberation of Mesch marked the start of the retake of the Netherlands, which had been invaded by Germany 74 years previously.

Over 5,000 soldiers belonging to the army corps known as Tomahawk stood on the border with the Netherlands on September 11th. The next morning at 10am the 117th infantry regiment, nicknamed Old Hickory, streamed into the orchards around the village and fierce fighting ensued.

Four hours later the Germans fled and Mesch was free.

Two days later, the Americans entered Maastricht, making it the first Dutch city to be liberated. Five days later Operation Market Garden began and the liberation of the rest of the country could begin. The entire country was freed by May 5, 1945.

The celebrations in the south conclude on Saturday with a ticker-tape parade in Maastricht city centre, including fly-pasts by aircraft, bands and army vehicles will ensure a festive parade.

Do you, or one of your relatives remember the end of World War II in the Netherlands? We would like to hear your stories. Email editor@dutchnews.nl