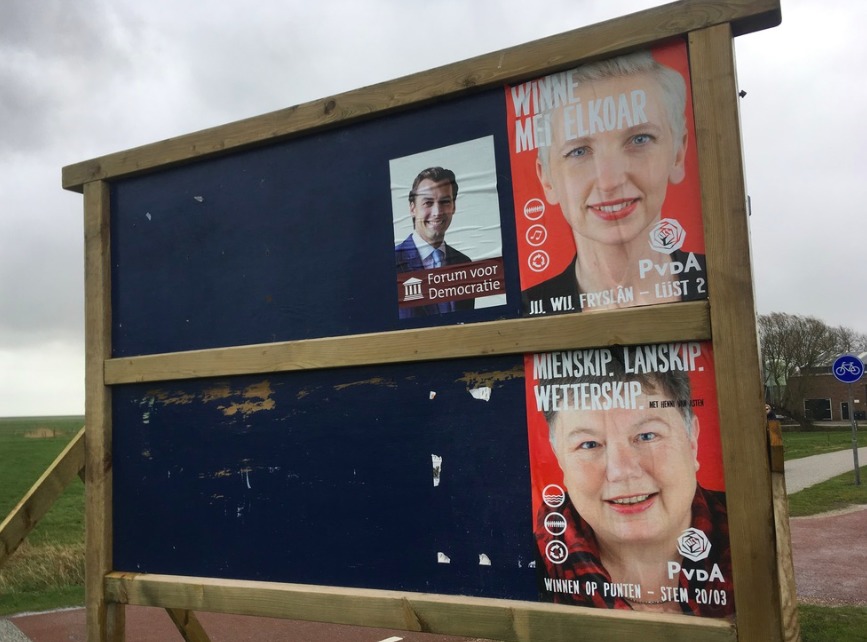 An election poster in Friesland featuring Forum and the PvdA. Photo: DutchNews.nl

Infighting and divisions at nationalist party Forum voor Democratie have cost the new grouping major support, according to a string of opinion polls.

A new poll by Maurice de Hond on Sunday said the party would win 14 seats in the 150-seat Dutch parliament if there was a general election tomorrow. That is half the total recorded in the spring, when the party emerged as the biggest in the regional election vote.

The new De Hond poll gives the ruling VVD 28 seats (19%), down five on its current total in parliament but an improved performance on earlier this year. The Labour party continues to rise and would now take 19 seats, or around 13% of the vote. The Christian Democrats are on 16 seats in the De Hond poll.

It is the first time in years that the three traditional Dutch parties are back on top.

Last week two other polls also highlighted the decline in support for Thierry Baudet’s Forum since it expelled co-founder Henk Otten in a string of acrimonious statements and Twitter messages.

I&O put the VVD on 32 seats, or 21%, just one seat down on its general election total. The poll also indicated that Baudet’s image had taken a major knock, with his personal rating dropping from 4.1 out of 10 to 3.5 and just 36% of the party’s supporters saying they approved of Baudet’s performance in the dispute with Otten.

An EenVandaag poll, also published last week, said Forum’s support had gone down from 25 seats in March to just 11 (7%), and had dropped seven seats in the past month.

The main beneficiary of the drop in support for Baudet and Forum is Geert Wilder’s far-right PVV, which would gain between one and five seats, the polls show.

Wilders told a rally of far-right parties in Italy on Saturday that nationalist parties in Europe are experiencing ‘tough’ times but said they would make a come-back.

The De Hond poll also shows increasing support for the current four-party coalition which can now count on the backing of 54% of the population. In spring this had plummeted to 35%.