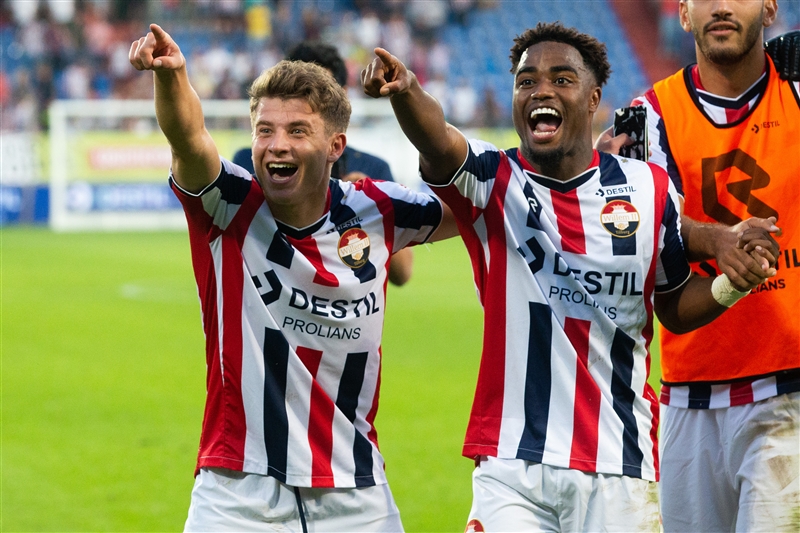 Willem II took advantage of the truncated weekend Eredivisie programme to go a point clear at the top of the table after four games.

While PSV, Ajax and AZ Alkmaar all had their fixtures postponed because of their European commitments, the Tilburg side beat Emmen 2-1, with both goals coming from their German striker Mats Köhlert.

The 21-year-old summer signing from Hamburg dribbled through Emmen’s defence to deadly effect, either side of a penalty by Marko Kolar. ‘They were two great goals, but the most important thing is that the goals gave us the three points,’ he said.

Sparta Rotterdam missed the chance to overtake Willem II on Sunday as they could only draw 2-2 at PEC Zwolle. A late goal by substitute Lars Veldwijk salvaged a point against a Zwolle side who had lost their opening three fixtures.

VVV Venlo upset the form book in Utrecht to consign the home team to their first defeat of the season. Teenage striker Evert Linthorst scored twice just before half-time, while Adrián Dalmau, who bagged 19 goals for Heracles last season, ended his first match for Utrecht on the losing side despite pulling one back in the second half.

The other team that could have topped the table, Vitesse Arnhem, also had to settle for a draw at Heracles Almelo. Cyril Dessers scored the equaliser 10 minutes from time after Bryan Linsen had volleyed the visitors into a 66th-minute lead.

Last year’s Jupiler League champions FC Twente remain unbeaten following a 0-0 draw at Heerenveen, though they had to rely on the crossbar when Ibrahim Dresevic’s free kick had Joël Drommel beaten.

The other promoted side, RKC Waalwijk, lost 3-0 at home to ADO Den Haag, who claimed their first points of the season. Two second-half goals by Tomas Necid complemented Tom Beugelsdijk’s first-half header to send RKC to the foot of the table.