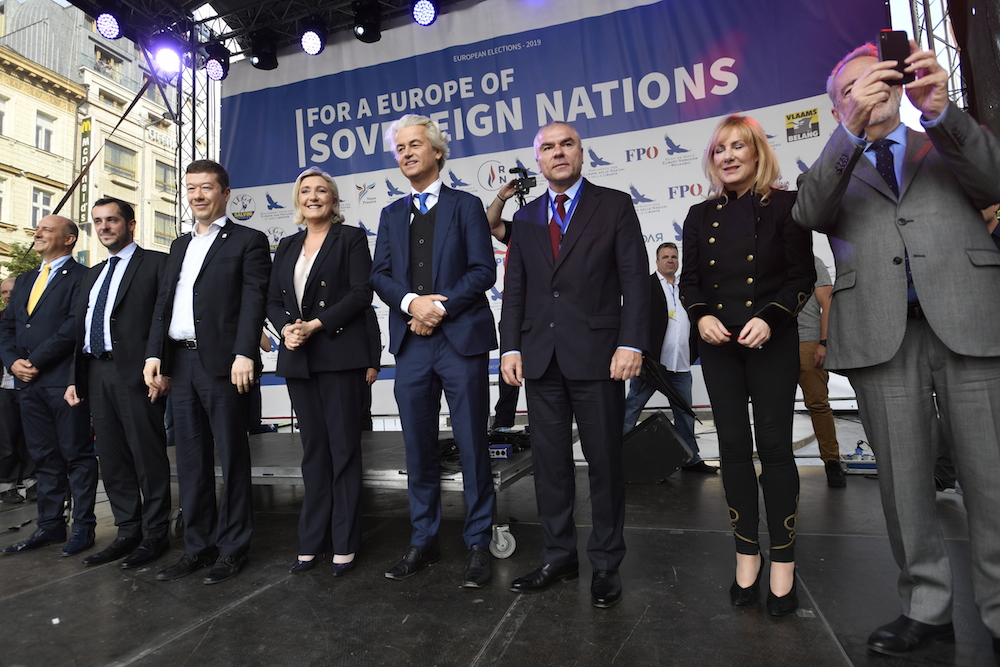 The far right European parliamentary faction founded five years ago by Geert Wilders and Marine Le Pen held a rally in Milan this weekend in an attempt to widen its influence and consolidate the far-right parties in the European parliament.

The ENF (Europe of Nations and Freedom) grouping in Europe, currently has 35 seats and is the smallest in the parliament. Wilders, Le Pen and several other far-right leaders were in Milan for the meeting which included Italy’s current home affairs minister Matteo Salvini, Germany’s AfD plus Czech and Bulgarian nationalist parties.

However, Hungarian prime minister Viktor Orban and his Fidesz party who have according to Euronews, refused to form any form of alliance with Le Pen, were not present in Milan.

‘Marine Le Pen and I had a real job putting this party together five years ago, and now there are twice as many of us,’ Wilders told the NRC ahead of the meeting. ‘We want to work with the heroes of Europe against the European Union monster. We may be the third-biggest grouping, perhaps even bigger.’

Opinion polls suggest Salvini’s Lega is on target to deliver 26 MEPS to the new group, with Le Pen’s revamped RN on 20 and the AfD on 11.

Support for Wilders’ anti-immigrant and anti-EU PVV, however, is set to shrink in next Thursday’s election as voters turn to the pro-Nexit Forum voor Democratie.

But Forum campaign leader Derk-Jan Eppink said in April the party will not join Wilders’ far-right platform. ‘Working with Mrs Le Pen is a bridge to far for us,’ Eppink said.

Two Dutch Protestant parties – the fundamentalist SGP and government party ChristenUnie – are also members of the ECR with one MEP each.

The party’s position on climate change and support for a Nexit are main stumbling blocks, he said. ‘We will have to find another grouping and that is what we are now thinking about,’ he said.

The fundamentalist SGP said it had no objections to working with Forum but that it would stick with ChristenUnie and look for a new home.