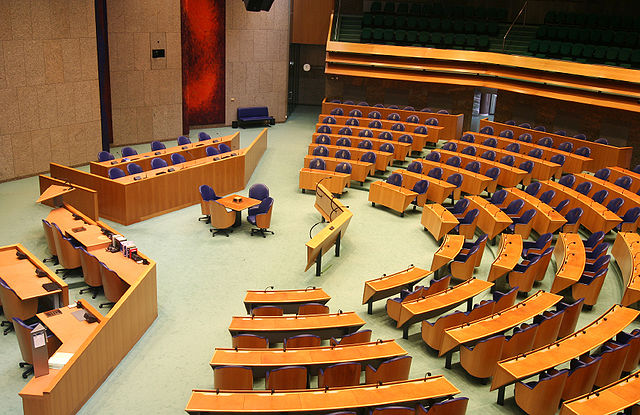 More than one of the 10 MPs elected to Parliament just over a year ago have quit their seats and been replaced by a party colleague.

Twelve of the 17 members who have resigned since last March did so to join the new cabinet last October, under the rule that prevents individuals holding posts in the executive and the legislature at the same time.

The other five include former Socialist Party leader Emile Roemer, who left Parliament shortly after Lilian Marijnissen took over as party leader in December, and is currently acting mayor of Heerlen.

Fellow socialist Nine Kooiman gave up her seat in March, claiming that her working hours were not compatible with raising her baby son, who was born last year. ‘I was constantly having to decide, do I want to stay home today and put my child to bed or will I be fully occupied with work again?’

Under Dutch electoral rules seats are allocated by party rather than individual MPs, and members who quit are replaced by a colleague according to internal party rules. However, once an MP has taken a seat they cannot be forced to give it up even if they leave, or are expelled by, their party.

Former finance minister Jeroen Dijsselbloem also quit in October, when the new cabinet took office, on the grounds that he ‘no longer had the drive’ for the job. Dijsselbloem was replaced in his other role as chairman of the Eurogroup, the committee of finance ministers in the eurozone, in December.

Elbert Dijkgraaf, of the orthodox Christian party SGP, handed in his resignation in April citing exhaustion, following a three-month period of sick leave. Dijkgraaf, who was replaced by Chris Stotter, also said he was dealing with problems in his marriage.

Green Left MP Linda Voortman is poised to become the sixth early departure following the local elections in Utrecht, where she is being lined up for an alderman’s post if her party joins the city’s coalition government, as seems likely.

Parliamentary chair Khadija Arib spoke out against the trend last August when Pieter Duisenberg, MP for the VVD party, quit to take up a job with the universities’ association VSNU just five months after being elected.

‘It’s no secret that I think it’s a pity,’ said Arib. ‘Obviously because your party and the voters expected more of you, but also because you could undoubtedly have made a big contribution to parliament as a whole.’