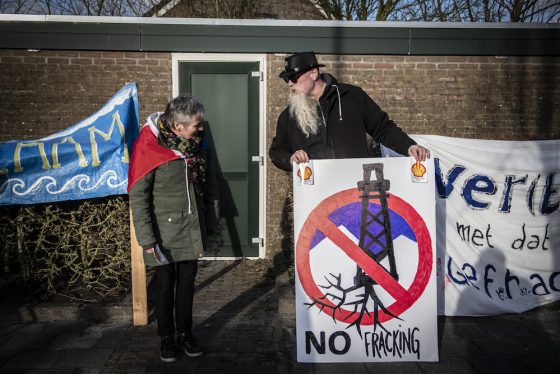 Dozens of angry villagers from Pieterzijl in Groningen have taken part in a protest at government plans to allow gas company NAM to use fracking technology to extract gas from a small field close to their homes.

They carried a coffin and banners with the words ‘trust is dead’ to the meeting with economic affairs and NAM officials at the village hall, who were there to explain the proposals.

News that the ministry plans to approve the use of fracking technology to start off the gas field was published on the same day that economic affairs minister Eric Wiebes announced that the main Groningen gas fields would be closed down by 2030.

There are hundreds of small gas fields in the Netherlands, most of which are in the north, and they are not affected by the government’s plans, an economic affairs ministry spokesman told DutchNews.nl.

The Dutch mining authority SDM says the risk of subsidence from these smaller fields is extremely small and that the Netherlands needs the gas they produce.

Fracking is used in the US on a wide scale to extract gas from shale and has led to a number of pollution scandals. In February Wiebes announced that the Netherlands would not allow shale gas production.

‘Shale gas is not an option in the Netherlands any more,’ Wiebes said. ‘We are not doing it. It is over and done with.’

However, fracking – the process of pumping in water mixed with sand and chemicals – has been used to start up smaller fields in the Netherlands for 50 years, the economic affairs spokesman said.

Locals are not convinced. ‘We are against the development of new, small oil fields given the uncertainty about the effect on people and the environment in the long term and on the current unrest,’ Zuidhorn local council, which includes Pieterzijl, said in a statement.

Protesters have until May 9 to register their objections to the Pieterzijl fracking plans.