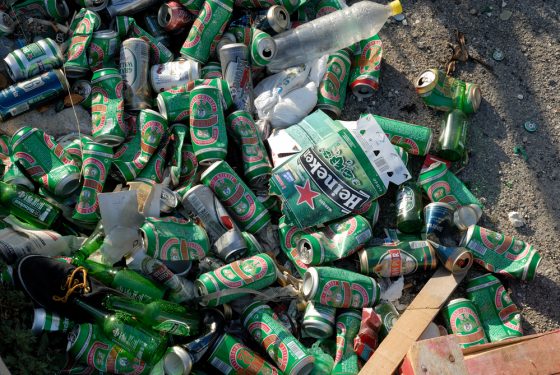 Amsterdam police chief Pieter-Jaap Aalbersberg has criticised city centre supermarkets for stocking up on beer ahead of last week’s friendly football match between England and Oranje.

The police were so tied up in keeping the drunken British supporters under control over a three-day period that two city police stations had to close their doors because there was no manpower available to staff them, Aalbersberg told local broadcaster AT5.

In total, 140 England fans were arrested in the run-up to the match after drunken gangs clashed with police in the city’s red light district. Video footage shows the England fans throwing beer at passing boats and chucking a bike into the canal.

‘Supermarkets are partly responsible for safety,’ the police chief said. ‘If we know that football supporters are in town, is it really responsible to stack up the beer on the street?’

Several city centre supermarkets had stocked up on beer ahead of the game, Aalbersberg told local broadcaster AT5. One had built an war of cans of beer for fans to take away, he said.

Meanwhile, local councillors from the right wing liberal VVD have said that English supporters should be banned from the city from now on. ‘As long as they cannot behave themselves, then as far as the VVD is concerned they should no longer come to Amsterdam,’ councillor Marianne Poot told AT5.