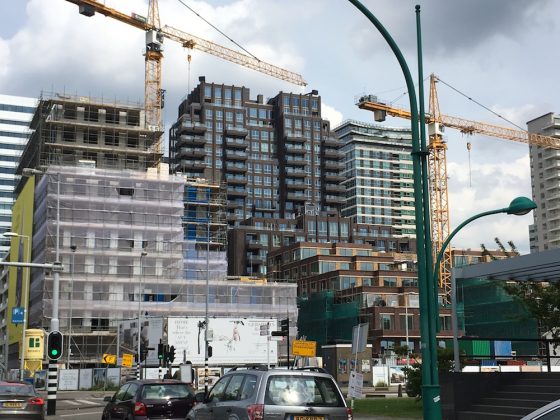 The EMA’s headquarters will be in Amsterdam’s Zuidas district. Photo: DutchNews.nl

Italian opposition to the move of the headquarters of the European Medicines Agency  to Amsterdam appears to have been ended by the European parliament, the Financieele Dagblad said on Monday.

The parliament is expected to place a requirement on the Netherlands to submit a progress report on the construction of EMA’s new headquarters every three months, the FD said, thus ending Italian calls for a move to Milan instead.

The compromise proposal admits, however, that the delays in the construction of the new headquarters are ‘alarming’ while acknowledging Amsterdam was the choice of the EMA staff.

Giovanni La Via, the Italian MEP responsible for the EMA dossier, is expected to report about the recent inspection visit to Amsterdam to the parliament in Strasbourg on Monday. The compromise proposal will then be incorporated into a vote which is scheduled for Thursday.

The EMA is being forced to move out of London because of Brexit. Amsterdam was one of the candidates for the new headquarters and won out over Milan after lots were drawn in the final round.

The Italian delegation objected to the fact that the EMA would have to move operations twice because the new Amsterdam headquarters would not be ready in time.

The EMA must move out of London in March next year into temporary accommodation in Amsterdam until the new €255m EMA headquarters is completed in mid November. The Dutch government is picking up that bill.